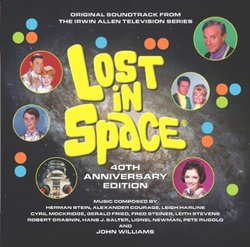 I think that if in the mid 1960's the tables had been reversed and John Williams had somehow been associated with Gene Roddenberry's Star Trek rather than Irwin Allen's Lost in Space, then all music originally composed for the former would be available on disc as opposed to the latter. Both television series featured wonderfully dynamic, memorable music and shared several of the same composers between them, yet despite the fact that Lost in Space never inspired animated and live-action spin-offs, multiple feature films or as much fervor in its fans as Star Trek, we find more attention lavished upon it as of late. It could be the over-saturation of Trek in the marketplace in the past 40 years, while Lost in Space might seem like an undiscovered and under-appreciated gem. In terms of music, the presence of the legendary John Williams at the helm of the series inception, its themes and subsequent episode scores, practically guarantees multiple releases of all its original tracks.

A number of years ago, GNP Crescendo released a massive CD collection focused upon music from the various Irwin Allen television series, including Lost in Space. It is safe to say that most fans probably would not have expected even more music from that library to see the shiny surface of a CD, but now we heartily welcome this 2-disc set from La-La Records which features a fair amount of material missing from the GNP collection. The John Williams-penned efforts for "The Reluctant Stowaway," "Island in the Sky," "The Hungry Sea" and "My Friend, Mr. Nobody" appear again here on the first disc, but each is bolstered by unreleased cues. Most fans are familiar with these selections by Williams, but they are all great fun and is interesting to catch glimpses of the stylisms which would gain prominence in the next decade and beyond. His swirling woodwind motifs, staccato trumpets and low brass ostinatos presage more of his 70's and early 80's work, such as The Towering Inferno, Black Sunday, Dracula and even Raiders of the Lost Ark. There is a lot of energy and ethereal textures in these tracks, though short motifs are the order of the day instead of long-lined melodies, although there are marvelous, searching themes in "The Hungry Sea" for the all-terrain vehicle called the Chariot and lovely, lilting material in "My Friend, Mr. Nobody". However, I have often wondered why Williams never made use of his jaunty title theme within the episode scores themselves, as Alexander Courage and others did with Courage's own Star Trek title tune, either as a sign-off, clarion call or possibly a recurring traveling theme

The second disc opens with the theme Williams wrote for the third season, one more bold and adventurous than first season's more playful main title, this time led by French horn with chattering winds in accompaniment. It is ironic that the third season itself was goofier and more oddball in tone than either of the previous two, leading one to think that these two title tunes perhaps should have swapped seasons. Presented next is a short track from "The Derelict" by Herman Stein and Hans J. Salter, moving from moody and martial to pastoral. A length, 17-minute suite from the episode "Welcome Stranger" is included, composed by Stein and Frank Comstock. This offers more of a Western flavor, initially subdued, with familiar, warm themes for the Robinson family appearing here on oboe and violin, which were tracked often into subsequent episodes. Later in the suite, the Western theme receives a more spirited rendition, plus a noble version on French horn. The next extended suite is from "Blast Off into Space" by Leith Stevens, of War of the Worlds (1954) fame. It begins unassumingly in plaintive woodwinds and horns, which return later, but we also get a taste of the orchestral fireworks which will dominate the track. As the suite gathers tension, muted trumpets, low brass and swirling chimes signal ominous occurrences before sharp accents from the brass, xylophones and timpani spell out the danger more forcefully. The action intensifies in the last four minutes, where heroic rising motifs in the trumpets call out until the unresolved crescendo. Selections from Robert Drasnin's "Curse of Cousin Smith" follow, lightening the mood with a perky tempo and banjo in one track and a slinky jazz set in the second, a genre Drasnin also explored in his Man from U.N.C.L.E. scores.

Alexander Courage is featured in the next two tracks, in suites from "The Girl from the Green Dimension" and "Cave of the Wizards." The former moves from mischievous woodwinds and rhythms to solo pipe organ and then into a mock-heroic setting for horn, snares and woodwinds, while the latter has a more mysterious, uneasy tone, utilizing harpsichord and threatening brass. The endlessly inventive Gerald Fried is represented by "Collision of Planets", which sounds as if musically it would be a great companion piece to "Blast Off into Space", but instead includes funky instrumentation of bongos, guitar, drums, bass guitar and woodwinds. The groovy-ness continues into "The Promised Planet" from Pete Rugolo, which is simply an all-out, era-specific rock jam complete with an indelible melody and electronic keyboard solo. Orchestral accompaniment returns in the following tracks, the first a suite of cues from two episodes, "The Sky Pirate" and "Ghost in Space," by Leigh Harline and film music legend Lionel Newman, with an additional track from "The Sky Pirate" following, this time composed by Cyril Mockridge. The mood here is light and pleasant in tone, with some playfulness and an emphasis more on strings, pizzicato and bowed, rather than brass.

Another noted Trek composer, Fred Steiner, brings back the more expansive, adventurous colors in a suite of his music from "Space Circus." The music initially explores atmospheric territory through a pedal drone, muted trumpet accents and a bed of mysterious yet silky string textures. The action picks up through growling low register instruments, a steady pulse and nervous brass and xylophones punctuations. For the closing tracks, we get the brief, silly "Space Walk" by Drasnin for the episode "Forbidden World," an off-kilter, unused title theme by Warren Barker which would have been better suited for McHale's Navy and the season three end title. And now, fans of the show, the composers and great television music in general can celebrate this release as it book-ends the GNP edition and provides a wonderful testament to how much musical talent and variety went into series such as Lost in Space, despite it being an uneven show overall. Now if only the remaining, original Star Trek scores can be preserved in such loving fashion!