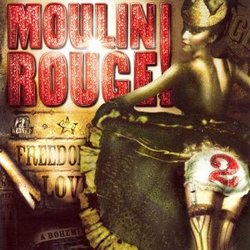 It's a mystery and a shame that the big musical film of 2001 isn't eligible for the Academy Awards for Best Score or Best Song.  Well, it's not really a mystery - it's all due to technicalities, and arcane rules that prevented it from happening. Nonetheless, Moulin Rouge has been snatching up award after award, in nearly every category it's nominated in, and the score even won the Golden Globe for lead composer Craig Armstrong.  Armstrong's score promo has been floating around, and even garnered a hefty price on eBay.  But fans out there were clamoring for more music from the film.  There were plenty of songs not on the first album, and people wanted to hear it all!  Well, Interscope Records and director Baz Luhrmann along with Musical Director Marius de Vries and Music Supervisors Anton Monsted and Laura Ziffren have all come back together to bring us back to the Moulin Rouge, Moulin Rouge 2.

The album starts out with Craig Armstrong's instrumental adaptation of Elton John's "Your Song", which is nice but nothing special.  We then get the "original film version" of "Sparkling Diamonds", Nichole Kidman's opening number in the film.  I use quotes because it's not quite the film version, but it's a lot closer than the first album's mix was.  An interesting remix of "One Day I'll Fly Away" (I prefer the original album version) is followed by the delightful ensemble romp, "The Pitch (Spectacular Spectacular)", complete with "swishing" sound effects.

The original film version of "Come What May" is presented here, which also poses an interesting question: where is the third version?  The first album had the "pop" version, the second album has the "film version", but where's the "music video version"?  Could there possibly be a Moulin Rouge 3 album in the works?  I hope so - but for reasons I will get to later.  The ecclectic (and zany) rendition of Madonna's classic "Like A Virgin" is on this album, much to everyone's delight.  Amiel's pounding "Meet Me In The Red Room" is followed by yet another instrumental version of "Your Song" (how many of these are there, honestly?).

The exciting Broadway-esque rendition of Queen's "The Show Must Go On" is also on this album, and I am happy to say that it's one of the more exciting tracks on the disc.  A true pity the song itself is so short - I wanted more!  "Ascension / Nature Boy" consists of a bit of Armstrong's score ("Ascension"), followed by Chris Elliot's arrangement of "Nature Boy".  It's tender and moving, and a sad way to conclude the film. (Well, it is a tragedy...)  The final cue on the album is by Steve Hitchcock (aka Steve Sharples), and consists of the end credits to the film.  Soft and tender piano slowly builds up into a rhythmic groove with a repeating ostinato that I challenge you to get out of your head.  In the end, this is a killer track, and with a hearty length of 6:53, it's sure to be played over and over again.  Oddly enough, though, this is also labeled as "original film version" even though it's a different mix.

Running only 43-minutes long, this albums true travesty is that it doesn't have any more stuff on it.  This could have been a hearty 70-minute long album, and everyone would have been happy.  Where is "A Fool to Believe"?  Or the original film version of "Because We Can"?  What about the rest of Craig Armstrong's award-winning score?  As good as it is, this album could have been even better.  All I can do for now is put the DVD in my player and enjoy it with all the sound effects and dialogue.  Oh well.  Still, if you're looking for more music from Moulin Rouge, this album shouldn't be passed up.  I can only hope that they put out another disc with the rest of the music, although three releases for one film is a bit much.  We shall see.