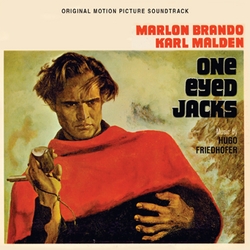 Track Listing Legend:
* Error: This track is actually from The Jayhawkers! and not by Friedhofer at all. This issue is corrected in the Encore Edition (Kritzerland, 2014).

From the moment of their inception, some films are simply destined to become legendary in one way or another and Marlon Brando's sole directorial effort had legend stamped on it from the get-go. But what gives the film a great deal of its luster and brilliance is the score by Hugo Friedhofer.

Sometimes the stars are magically aligned and a composer gets a perfect project, one that plays to all his musical strengths—Friedhofer's music elevates One-Eyed Jacks in every sense—it's passionate, beautiful, exciting, dramatic, luminous—and one of Friedhofer's greatest achievements, in a career filled with them.

One-Eyed Jacks was originally released on LP by Liberty Records. Friedhofer had all the scoring masters available to him and from these he prepared the album release (any thoughts of a 2 LP set vanished when the film did not perform at the box office). Obviously because of LP time restrictions, less than half of Friedhofer's amazing score was on the album.

On CD 1, we present that original album program, remastered from the original two-track album masters, along with two alternate cues from the full score. Note: On our original release, there was a mistake on the "Alternate Main Title," which was actually from The Jayhawkers! and not by Friedhofer at all. For this release, we were thrilled to find there actually was an alternate main title and we're happy to include it.

On CD 2 we present Friedhofer's entire score in all its magnificence, in pristine stereo sound. To hear this score complete is a revelation—and for Friedhofer fans and any fan of great film music, this 2 CD set is a must-have. This is the world premiere release of any of this music on CD. The booklet features new and great liner notes by Nick Redman.