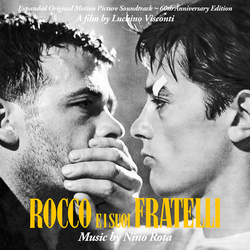 To celebrate the 60th anniversary of one of the most important neo-realist movies ever filmed in Italy, Quartet Records proudly presents Rocco e i suoi Fratelli (Rocco and His Brothers), a 2-CD set featuring for the first time the complete original score of the landmark collaboration between Luchino Visconti and Nino Rota.

The film finds the young Rocco (Alain Delon), his mother and three siblings moving from the South to Milan, hoping to reunite the family with the eldest brother. However, diverging life goals as well as the appearance of a prostitute (Annie Girardot) cause a jealous rift between the siblings and inevitably lead to the family falling apart.

Following an operatic scheme, the music of Rocco e i suoi Fratelli is one of the most radiantly beautiful scores composed by Rota, and one of his great dramatic classics, singled out by Francis Ford Coppola as one of the main reasons he hired Nino Rota to score The Godfather. The low-key, sultry jazz score manages to depict Milan as a city of endless possibilities as well as cruel realities.

This 2-CD release contains the expanded score presentation on Disc 1 and the remastered original LP program plus unused alternates on Disc 2, all restored and mastered by Chris Malone from first-generation master tapes courtesy of Gruppo Sugar. The 20-page booklet includes liner notes by Gergely Hubai that discuss the film and the score in detail.