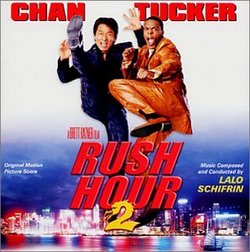 When it was released way back in 1998, Lalo Schifrin's score to Rush Hour was a tribute to his earlier pinnacle score from the 1970s, Enter the Dragon.  Director Brent Ratner intended for Rush Hour to have all of the heavy brass, guitars, and funky jazz of the classic Bruce Lee film.  For the second film, however, Schifrin wanted to do a more traditional symphonic score, and the resulting Rush Hour 2 is a mixed bag.

The only time you really hear the main theme from Rush Hour is in the opening of the "Main Title".  However, that quickly turns into a sweeping string section performing underscore to the opening sequence, while brass provides some backup.  It has an Asian-edged feeling, but doesn't feel like a fully melodic theme.  "Out Of The Way" is tense orchestral underscore that feels so tightly-tuned to the action on screen that it's tough to enjoy it on the album.  "Mu Shu Parlor" is an ethnic-sounding source cue, taking full advantage of Asian instruments.  Schifrin does a nice job of integrating his main theme into this source cue, tying it into the film's thematic structure.  "Parlor Fight" has some tense string work, integrated with complex percussion rhythms and brass hits, resulting in an appropriately exciting action cue.

"Action Agents" allows Schifrin the opportunity to play off his success of "Mission: Impossible".  When the slinky percussion and bassline start up, with a nice flute version of the main theme, you can't help but crack a smile.  "Isabella" is a seductive cue with some soft jazz rhythms that sandwiches a tense chase sequence.

Two jazz songs are included on the album: "Lil Darlin'" by Neal Hefti, and "Shiny Stockings" by Frank Foster.  Both of them are soft and enjoyable.  They fit quite well into the second half of the film, set in Las Vegas.  Speaking of Vegas, "Nevada Mood" is a great number that highlights Schifrin's talent for Jazz writing.  "The Cosmo Is Las Vegas" is a mish-mash of a cue, combining tense underscore with Big Band jazz and Oriental percussion.  Of course, it includes a variation on the main theme that you might not notice, but it's there.

Tense underscore follows for the three last tracks, and that is where one of the album's weaknesses is exposed.  It just ends abruptly.  There is no musical conclusion or denouement.  As a listening experience, I felt someone left hanging.  Overall, this score had its highlights with the jazzy numbers, and the thematic cues.  I really didn't care too much for the incidental music; it wasn't bad, but it wasn't something that made a great CD listening experience.