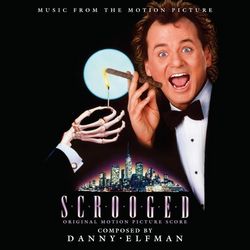 An important score in Danny Elfman's cannon, Scrooged was the composer's first big-budget Hollywood score-and one that clearly anticipates his next, and most iconic work, Batman. For this wickedly funny and inventive update of the immortal Dickens Christmas classic, Elfman fashions a robust, sophisticated musical tapestry that expertly weaves together the film’s varied tones, which runs the gambit from wildly broad comedy and holiday cheer to gothic horror and emotional drama.

Produced by Dan Goldwasser and mastered by Mike Matessino, this special release features bonus tracks, source cues and exclusive liner notes from film music writer Jeff Bond, with new comments from Director Richard Donner and others. This is a limited edition release of 3000 Units.