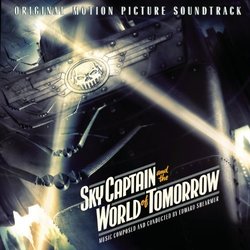 Sky Captain and the World of Tomorrow

Review: Sky Captain and the World of Tomorrow

If filmmakers in the 1930s had access to today's technology, the result might very well be a film like Sky Captain and the World of Tomorrow. With art deco designs, and a very heavy Max Fleischer influence, the design and look of the film is so processed so that you don't really care that it was all shot on blue-screens; it's just so pretty to look at that if you're like me, you just go along for the ride and take in the sensory overload. It is an adventure story that takes us to the far-reaching corners of the globe, from the heart of Manhattan to the jungles of a mysterious island, to the remote mountains of Nepal. It's an adventure flick in the classic serial style, full with archetypes, heroes, and villains that seem somewhat familiar, even while seeming new. It is a film that allows us to put aside our problems of the day, and just remember that in this alternate reality, if there is any imminent threat, Sky Captain will come to the rescue! And no hero would be complete without a musical underscore that emphasizes all of the right point. In this particular case, versatile composer Edward Shearmur provided a fully orchestral underscore that fits right in with the adventurous classics of the first half of the 20th century.

The main Sky Captain theme is first heard in the "The World of Tomorrow", brassy fanfare with pounding strings stressing the heroism. The film moves at a brisk pace, starting with the arrival of a German scientist via zeppelin (a visually magnificent sequence) in "The Zeppelin Arrives", an ominous cue full of wonder and awe. But things get downright aggressive once "The Robot Army" comes up, involving a full-scale attack on New York City. Chronicle reporter Polly Perkins (Gwyneth Paltrow) is caught in the middle of the action, and Sky Captain Joe (Jude Law), her ex-lover, is called to the rescue in a very comic-book manner. "Calling Sky Captain" reprises the main theme, which builds into a ferocious action-sequence as he attacks the robot army. Shearmur's orchestration is old-school, with running strings, punctuated brass, and plenty of nods to Williams and Korngold, among others.

There is a bit of a break, allowing for a hint of the romantic theme in "Back at the Base". But the cue quickly turns ominous, and before long we're back into another major action sequence. "The Flying Wings Attack" is a lengthy 6.5-minute cue that gets the heart racing. Classical music is a definite influence in this score, and this is a stand-out cue which showcases Shearmur's abilities as a composer. Not to be outdone with action cues, we're given a majestic version of the main theme in "Flight to Nepal", as well sweeping epic-styled music in "Treacherous Journey".

The love theme still makes an appearance here and there, showing up in "Three in a Bed" before being tossed aside for a little comic relief. Frankie (Angelina Jolie) gets a bouncy heroic theme of her own, as well as a little bit of playful underscore highlighting the romantic tension between her and Joe (and Polly's jealousy) in "Finding Frankie". Frankie's main theme gets a nice treatment intermixed with the Sky Captain theme and Polly's romance theme in "Manta Squadron" before it blows up into full-scale action once again.

It took a while, but in "h-770-d" we're finally allowed to get a nice full rendition of the love theme, but just when you settle into it, we're given another action cue ("Flying Lizard") in a sequence that has plenty of visual nods to King Kong, but feels like a missed musical opportunity to lend homage to Steiner's score. The finale of the film takes place in "Totenkopf's Ark", another pulse-pounding cue that then goes into "Back to Earth", which gives us the expected "montage" of themes, from the heroic Sky Captain theme, to the romantic theme, before ending on a "happily ever after" note. The album ends with Jane Monheit singing "Over the Rainbow" (The Wizard of Oz shows up in the background of a scene in the film), and her voice is so soft and sultry - I can't help but enjoy this rendition, even though it's much slower than you might be used to. As an aside, if you can get her solo album, I highly recommend it - it's quite good.

While Sky Captain might not necessarily be a film that lends itself to Oscar-winning acting, it serves as a great throwback to the time when films were made for entertainment, and adventure was served up weekly. Shearmur has done a great service to helping this film achieve this level of nostalgia, while at the same time delivering what is one of the best scores of 2004. Running a little under an hour, this is an album you can't afford not to have.