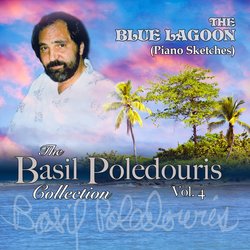 Dragon's Domain Records, to be distributed through buysoundtrax.com, presents a very special release of composer Basil Poledouris's original piano sketches and demos that were recorded in his home studio as he was creating the score for 1980's The Blue Lagoon. With this unique release, listeners are given the unprecedented opportunity to listen, like a fly on the wall in Basil Poledouris' home studio, as the composer works through his themes and musical interludes on the piano in 1979. Via cassette recordings made by the composer while working, the creative process of developing this film score from his initial piano noodlings to his far more developed and confident treatments is audibly documented. As themes both familiar and unrecognized are created and discarded during the course of composition, a major film score is born.

Released in 1980, Randal Kleiser's The Blue Lagoon was Poledouris' second major film score and largest breakthrough, leading to his magnificent score to Conan the Barbarian in 1982. Basil's score for The Blue Lagoon was straightforwardly romantic and tropically lush, recorded with a full symphony orchestra. It provided an eloquent, yet far from pretentious, melodic sound that treated the characters' emotional drama quite honestly and sympathetically. With this remarkable opportunity to hear the late composer at work, you'll hear the score come together as it happens through these preserved and meticulously mastered recordings.

As a bonus track, we've included a 10-minute recording of Basil and Randal Kleiser working over music a significant moment in the film with Emmeline's theme, which is a fascinating glimpse into the interaction between composer and director during the creation of this score.