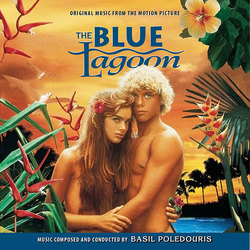 Performed by
The Australian Symphony Orchestra

In 1980, Basil Poledouris' score for The Blue Lagoon became his first soundtrack album. Scored only a couple of years before his massive score for Conan the Barbarian, Lagoon introduced to the record-buying public Poledouris' penchant for sweeping romance, exotic mystery, and his uncanny sense of adventure. It was certainly not his first big work, with Big Wednesday coming two years before, but Big Wednesday's adventurous, and even heroic symphonic splendor remained locked up until decades later, although that score formed the temp track for Lagoon. The Blue Lagoon is a richly thematic score, featuring a love theme introduced on solo piano that blossoms into a sumptuous arrangement for strings and winds in the album's first track. The main title ushers in the majestic principal theme—with its soaring intervals and cresting melodic contours, wonderfully redolent of the open sea. On this new expanded album, this theme returns occasionally, a welcome thread throughout the score.

Released on a 34-minute LP by Marlin and then subsequently on CD by the Southern Cross label, this long out of print soundtrack gets a new issue, sourced from the original master elements and expanded to include all of Poledouris' score, including alternates and Poledouris' original jungle drum source music for the natives (and replaced in the movie with stock music). Intrada was provided access to the original three-channel scoring session masters made at the AAV Studios in Melbourne, Australia.