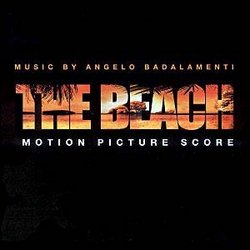 While the film was not the best of successes, there was plenty of hype surrounding The Beach. Based on a popular novel, the film starred Leonardo DiCaprio fresh off the boat as Richard, an American tourist who is searching for paradise. After discovering a the mythical "perfect beach" with a French couple, they discover that not all is well in Paradise. Half of the island is inhabited by gun-toting marijuana farmers, and the other half is inhabited by an isolated group of tourists who have decided to create their own society on this perfect island. Directed by Trainspotting's Danny Boyle, the film suffered from a few flaws, and while it might not play as nicely on its own, the score by Angelo Badalamenti was not one of them.

You could tell that The Beach was going to be populated with a lot of songs—and it was. Enough so that a pop soundtrack was released around the time of the film's release, whereas this score album was released shortly after the home video release. Badalamenti's score contains a wide range of orchestral styles and motifs, all wrapped in a synthetic techno-ish covering. The first track, "Bizarre City" chronicles Richard's first night in Bangkok, taking it all in.

While there is a rather enjoyable rhythm to the score, the best parts tend to be those that involve the main theme. This theme (referred to as "The Beach Theme") shows up through most of the album, and is the predominant melody in the film. Evoking memories of "Twin Peaks" (for some reason), this theme is enjoyable and simple—the perfect combination for sticking in your head.

Some of the more tense action cues ("Pure Victims") tend to have more synth elements than I would have liked to hear, but in the film it actually meshed rather well with the imagery (also considering that the songs throughout the film have the same types of techno texturing). This doesn't detract from the score as it appears in the film, but it does hamper the enjoyment of listening to the score on its own (which is what you would really do if you bought the album).

Overall, this is a pretty good Angelo Badalamenti score, but since the only real saving grace is the highly memorable (and melodic) main theme, you might want to think twice before running out and getting this album. I would suggest watching the film first (if you can do that) before making up your own mind. Released through London Records, the album has a running time of about 45-minutes.