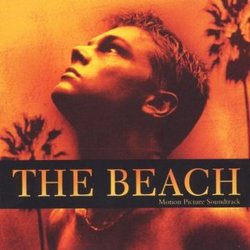 The Beach was a movie starring Leonardo DiCaprio and takes place in Thailand. There wasn't much plot, but there was plenty of action. The film didn't do very well (it seemed to vanish from theaters quickly), but the soundtrack is actually pretty good and seems to be doing better than the film ever dreamed of.

There are a few great things about this album. "Snake Blood" fades in over the course of a minute. It was sneaky: I thought my CD player was broken. Actually comprised of themes that change over time, Leftfield's piece kept my interest throughout its entire length—something difficult to do in this genre. This was a worthy track with which to begin the CD. Moby's "Porcelain" more than made up for the track of his that I dissed in the review of The Next Best Thing. A strong member of his "film music" canon, Porcelain demonstrates Moby's deserved popularity. Not to mention that it was used (quite well) in the trailer for The Beach.

"Voices" is international in flavor, akin to the work of Deep Forest. I have not heard a happier or more go-lucky song in some time. Sugar Ray played my campus a few days ago. Their MTV-oriented rock was fun and enjoyable, if predictable. Then I heard the sixth track on the soundtrack, "Spinning Away". Harmony? Strings? Huh? This is really good! They wrote this? Oh, no, wait: Brian Eno produced this, as well as being a co-writer and original performer. Good cover, guys. William Orbit's "Crouch End Broadway" remix of Blur's "On Your Own" was a fruitful combination of genres. The Gen-X rock/punk stylings of Blur actually meshed quite well with Orbit's added dance beats. Combine this with ultra-violet lighting, a few kilowatts of power directed towards a sub-woofer, and some drunken party-goers, and you've got yourself some "phat beats" with Yeke Yeke (the "Hard Floor" remix), performed by Mory Kante. This gets the coveted "Booty Call Seal of Approval" (tm).

Unkle has an acoustic bass, an emotive singer, a formulaic drum beat, and a small string section with "Lonely Soul." Though initially I found it uninspiring, I quickly changed my mind. I found it to be one of my favorites, especially as they emboldened with some sampling and orchestral strings towards the end.

With all that yummy stuff behind us, now I look at the "eh" stuff. At first, I thought that "Pure Shores" was performed by the Spice Girls, not All Saints. Who are All Saints? I asked that question too, for I didn't know who the All Saints were until I explored the Web a little. Apparently, they're a UK-based, all-girl quartet that sing light pop. Eh, pop-lite. Ever go to someone's house party, get a little intoxicated, meet up with a nice "chica," and start grinding with her? Okay, now fast forward to 1:30 or 2 AM. The two of you are grinding out on the dance floor; you haven't quite determined who's bed you're going back to, but you're dancing to anything, no matter what it is, right? (If not, pretend.) Barry Adamson's contribution to the soundtrack is just that song. Abstract, experimental, and filled with movie dialogue, this song makes you say, "Wanna get out of here?" It made me say, "Next track."

Angelo Badalamenti and Orbital: two giants. Why in the "Eh" section with their Beached? I think that this collaboration could have been much more interesting. Some beats, some strings, some snippets of Leonardo giving sage advice. Repeat.

Now we come to the yukky stuff. Underworld put me to sleep with "8 Ball". To add injury to insult, they dragged out the song, almost nine minutes of muzak, far longer than it needed to be. "Return of Django", by the Asian Dub Foundation, sounded like a junior high school band playing dub. Very yucky. Faithless's "Woozy" sounded vaguely familiar to me. I wasn't sure why until I called an buddy of mine from my DJ years. As he reminded me, Faithless performed a piece called "Insomnia" that was a club staple about, hmm, two years ago. If one eliminates the cool synth hook from "Insomnia", one gets "Woozy." Didn't like this one.

New Order's "Brutal" was generic alterna-rock with harsher guitar and bass. It's been heard before. So ultimately this is a rather mixed soundtrack. There are plenty of good songs that make it worth picking up, and no one is going to force you to listen to the other stuff. So go pick it up, if anything above caught your fancy.