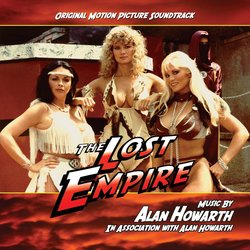 BSX Records presents the original soundtrack to The Lost Epire, featuring music composed and performed by Alan Howarth, in association with Alan Howarth, for the 1983 action adventure fantasy written and directed by Jim Wynorski.

When it came to scoring The Lost Empire, Wynorski selected composer Alan Howarth, who at the time was John Carpenter's musical associate. Howarth had just branched out to do solo work (adding some additional cues to Sam Peckinpah's The Osterman Weekend after the film's main composer, Lalo Schifrin, had completed his score); The Lost Empire would be Howarth's first feature film score on his own.

It gave Howarth the chance to do something the minimalistic vibe of the Carpenter scores up until then hadn't, and that was to compose exciting adventurous melodies and heroic themes. Howarth played straight man to the film's humor, embracing Wynorski's blend of fun fantasy, fierce fights, and frolicsome female flesh with music that supported the action and adventure of the storyline.

Previously released on compact disc by Silva Screen Records in 1990 and long out of print, BSX Records brings The Lost Empire to compact disc again, presented on 2 CDs. The music has been newly remastered and includes previously unreleased music. Disc 1 contains the music as it was presented in the film. For the final film mix, the music was mixed into mono but is presented here in stereo. Disc 2 contains the original album program that was assembled by the composer for the original compact disc release, where he combined shorter tracks and remixed many of them to exhibit additional stereo dimensionality for a better listening experience. The booklet contains new liner notes written by author Randall Larson, including new insights by composer Alan Howarth on the creation of the score.