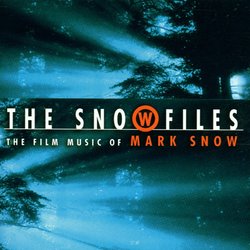 by David A. Koran June 23, 2001
2 / 5 Stars
Well, at least I’m not intending to rip Mr. Snow a new one. With the latest release from Sonic Images, the master of the art of "sound canvasing", Mark Snow gets to display, with the help of John Beal and Jeff Freilich, a bit of his more famous as well as some of his little known compositions of his career. I’d like to admit I’m not exactly a fan of some of this electro-acoustic music, but not out of distaste, but I believe out of the fact that everybody is writing music like Mark, and sometimes it’s hard to tell the pure signal from the noise. I’d say that my small experience with Mark Snow’s music would have me say that it’s not as strongly themed based as we would get from a Bernstein, Newman, or even for a Goldsmith; but it has qualities that set it apart from the group that most listeners would tend to lump it with.

The CD opens with one of most requested tracks by fans, the "Main Theme" to the television show, La Femme Nikita. It would be honest to say that Mark writing this theme is in natural progression of how the "Nikita" story has been done before, with Eric Serra (Goldeneye, The Big Blue) doing the original French version and upon it’s travel to America, Hans Zimmer doing his treatment for Point Of No Return. Having been not very impressed by either composer’s more recent works, it’s refreshing to hear a different take on the same story, albeit film versus television scoring requirements. The rest of the album is broken up into segments of "Darkness And Desire", "Love And Hope", "The Music Is Out There" and some bonus tracks. To be able to categorize these themes, you obviously must be able to say "That sounds like a love theme" or "That’s a broody piece" and this is exactly how they probably went about titling each section. The middle section of "Love And Hope" is particularly sappy and heroic, but still is notable in it’s ability to sound sappy and heroic rather than dark and depressing, which most folks would pigeon-hole Mark in to sounding like.

Nearing the end of the album we hear the greatest disjoint from what is considered typical Mark Snow, or at least the one most folks hear every week on the X-Files. The shortest tracks on the album, " The Lost Theme" from Max Headroom and "Bye Bye" from Pee Wee’s Playhouse provide an interesting departure, with Mark working from an Elfman-esque template for "Bye Bye", a truly odd piece demonstrating that Mark can also do "weird". Listening to the Max Headroom piece I’m left at a point of indecision as to which theme is better for the Sci-Fi show, which I’m lucky to catch on the Bravo network on weekends. I like the upbeat nature of both of these tracks, and even the preceding piece for Dark Justice which can be described as gothic-jazz, a carry-over piece from most of the rest of the album.

The big "chunk of change" on this album is definitely the thirty plus minute suite from the X-Files rendered for our enjoyment by fellow composer, John Beal. It’s an episode upon itself and is expertly executed, but is not exactly for the casual listener to pick up and play in their car stereo. The entire suite is an intertwining of several themes, developed as an amalgamation of the "best of" themes and soundscapes from the show. It serves best as late night listening if you want to induce action-filled nightmares (you get to fill in the Scully or Mulder characters on your own time).

Although most of Mr. Snow’s stuff wouldn’t be the first thing I’d pop into my CD player, it’s definitely a catch all for his music and will be a nice addition to a fan’s collection. I would, to fans’ dismay, say that the X-Files should end and run it’s course so Mark can move on to some of the other abilities he has displayed on this album.