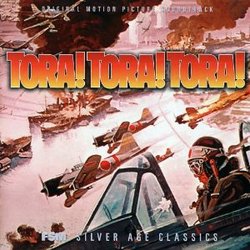 Jerry Goldsmith had just finished scoring his classic score to Patton when he worked on another World War II film, Tora! Tora! Tora!. This film tells the story of what happened at Pearl Harbor just before, and just after, the infamous bombing raid. Goldsmith had two years previously worked on another classic, Planet of the Apes, and many of the percussive influences from that project seem to permeate this score.

There are a few different types of cues on this album. The main and obvious one is the Tora theme - a very Japanese tune that is initially played on a koto and then builds into a full orchestral rendition. It's stirring and exciting to listen to - because we know what is to come. The "American" cues on the album are scores more Copeland-esque - strings and brass with many major chords. Also, there is quite a bit of minimalist dissonant scoring, as evident in such cues as "Imperial Palace" and "Little Hope".

Most of the score on the album seems to be Japanese at its core - the main Tora theme appears in a few variations. That is ultimately the highlight of the album - listening to how expertly Goldsmith plays with an idea, and comes up with the rest of the score to support that idea. The tense percussion rhythms used in "The Waiting Game" and "Pre-Flight Countdown" - the latter of which is one of the tensest cues on the album. This is where the Planet of the Apes influence truly show up. There are also a bunch of bonus tracks included on the disc - some military source cues, as well as two renditions of the (now familiar) Tora theme.

The sound quality on the album is pretty good - it's not great, but for a 1970s recording that has (until now) never been released, it's not too bad. The stereo separation and the sound mix is rather good, though. Released as a limited edition through Film Score Monthly, Tora! Tora! Tora! might not be one of the most famous World War II scores, but for any Goldsmith fan it's well worth checking out.