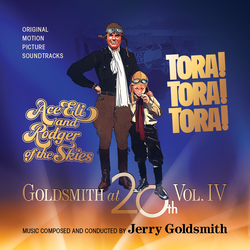 Volume IV showcases two more of the composer's original feature film scores – this time from two '70s aviation-themed dramas – 1973's post WWI father-and-son-barnstorming story Ace Eli and Rodger of the Skies, starring Cliff Robertson and Eric Shea, and directed by John Erman, and 1970's Tora! Tora! Tora! the Pearl Harbor docudrama starring Martin Balsam, Joseph Cotten, E.G. Marshall, So Yamamura and Tatsuya Mihashi, and directed by Richard Fleischer, Kinji Fukasaku and Toshio Masuda. While the films are only connected tangentially by the concept of aircraft and pilots, both scores on this 2-CD presentation explore wildly different sonic landscapes and emotions, and both soar as works of musical art.

Ace Eli presents two unique programs – The first is the original Goldsmith score in mono, in the film's original sequence. The film was later recut and additional music was written with contributions from Alexander Courage. These cues, and the song "Who's for Complainin'?" are presented in stereo alongside surviving stereo Goldsmith compositions in a sequence closer to the released version.