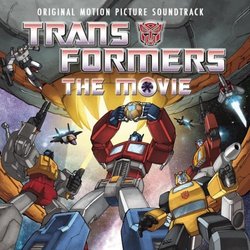 Transformer fever is firmly is upon us, and far be it me to stand in the way. A friend is making a killing on eBay right now selling old toys, people are actually getting excited about a Michael Bay movie and we have commemorative DVD and CD releases of the animated movie from twenty-one years ago. Nostalgia tends to comfort us with childhood associations; the opening guitar licks of Lion\'s "Transformers" cover and the shimmering metallic logo still sends a little thrill through me.

Nostalgia also blinds us to the actual quality of whatever it is we hold dear. By any objective stance, Transformers: The Movie is incredibly representative of that era of music.  This was the time of Pop-Metal music, with plenty of Def Leppard clones running around. Lyrics were incredibly optimistic with hysterical metaphors (such as "riding the eye of the storm" and "You\'ve been put to the test, but it\'s never enough") that pile up like a traffic jam. Revisiting old haunts can be quite fun if there is a lot of Kitsch involved, and Transformers: The Movie has plenty of that. It is the type of cheesiness that transcends silly to brilliant.

The most famous of these tracks is Stan Bush\'s "The Touch."  Now immortalized by Mark Wahlberg in Boogie Nights, "The Touch" is the epitome of driving 80\'s anthem rock and Bush\'s other track, "Dare" is similarly catchy and silly (with a really slick arrangement by Vince DiCola).  "Weird" Al Yankovic contributes a fun track ("Dare to Be Stupid" from the same-titled album) that spitballs a series of clever lyrics about being stupid (ironically enough). The rest of the pop tracks are a variation of tracks by Spectre General ("Nothin\'s Gonna Stand in Our Way" and "Hunger") and NRG ("Instruments of Destruction") which aren\'t particularly memorable.

The other main selling point is the movie’s score. Vince DiCola is the John Williams of cheesy 80\'s synth-rock scores and this is one of his greats.  I know more than a few people that have Rocky IV\'s "Training Montage" as a guilty pleasure in their play lists (myself included).  DiCola always had a good ear for
catchy rock rhythms and synthesizer loops, and he augments it with some piano accompaniment, guitar and drum beats.

Included in this release are three bonus tracks from DiCola and an alterative version of the theme. One theme is my favorite theme from the movie ("\'Unicron\' Medley" with the memorably creepy pulsing "breath" rhythm) along with two solid action cues ("Moon Base 2 - Shuttle Launch" and "Megatron Must Be Stopped (Parts I & II)"). But there a lot more music to the score (we get about a third of the score) and there are plenty of limited releases circulating with fuller (or full scores). Considering that the soundtrack album probably won\'t get released again, it would have been nice to have more.

But is it actually "good?" I don\'t think I\'ll ever know. I think the many fans will enjoy it and far be it me to ever get in their way.