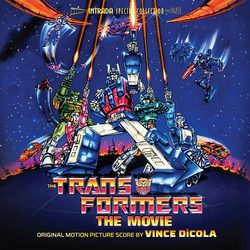 Review: From The Manufacturer

The Transformers: The Movie (1986) presented keyboardist-turned-composer Vince DiCola with the challenge of taking the rhythmic genre he loved into a new, futuristic dimension, using the same daring synergy that the makers of The Transformers' TV show were using to broaden their brand name. DiCola truly fused progressive "arena rock" with alien technology to make The Transformers a stylistic whole, capturing the movie's 2005 setting with its brightly futuristic synth sound. While Rocky IV had afforded him an orchestra, the budget of The Transformers necessitated an electronic approach. With the aid of co-producer Ed Fruge, programmer Casey Young, percussionist Michael Fisher and other first-call session musicians, DiCola stuffed the Scotti Brothers recording studio with Moog, Oberheim, Yamaha and EMU synthesizers and samplers. Initially working from storyboards and a plot synopsis, DiCola won the filmmakers over with a six-minute demo cue called "Legacy" that laid the seeds for his score, included here as a bonus.

The Transformers: The Movie has remained as rhythmically vibrant as ever for the franchise's numerous fans. It has previously appeared on two quickly sold-out BotCon limited editions ("'Till All Are One" in 1997 and "Lighting Their Darkest Hour" in 2001). This Intrada CD marks the first generally available release of Vince DiCola's complete score.

In 1986, it was decided that the best way to go into both a third season and a new product line was by giving the action figures a major cinematic upgrade with The Transformers: The Movie. The film's sizable ambitions were embodied by Unicron, a machine-eating planet whose attack on the Transformer home world of Cybertron posed a singular threat to both Autobots and Decepticons. The movie noticeably went far beyond the TV show in its robot-shattering scale of destruction, "brutally" trashing numerous old characters to make way for a shinier new toy line that included Insectoids, Dinobots, Constructicons and jingle-spouting Junkticons.