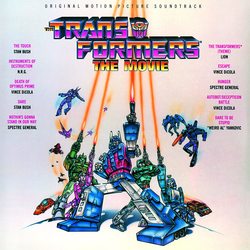 Set to a soundtrack of synth-based incidental music and hard-driving metal music, composed by Vince DiCola, the movie has a decidedly darker tone than the television series. Stan Bush's song "The Touch," which prominently featured in the film, was originally written for the Sylvester Stallone movie Cobra.

The movie also featured other well known songs including "Instruments of Destruction" by NRG, Stan Bush's song "Dare," two songs by Spectre General, "Nothin's Gonna Stand In Our Way," "Hunger" as well as "Weird Al" Yankovic's song "Dare to Be Stupid." The Transformers theme song for the movie was performed by the band Lion.