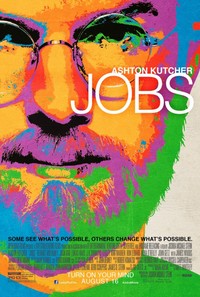 The best things about the quickly made Jobs, starring Ashton Kutcher as Steve Jobs, is its original score by John Debney. The music is romantic, epic and inspiring—everything a movie about Steve Jobs should be. Unfortunately, the movie itself sets a low bar and strives for mere mediocrity.

Kutcher's isn't all that bad as Jobs, but he isn't great. When it comes to acting, his performance epitomizes the difference between impersonation and acting. As an impersonation of Steve Jobs, Kutcher is good. But, somehow, Jobs' presence is missing. We don't have a sense of greatness.

Josh Gad as Steve Wozniak flat out doesn't work. He plays a caricature of himself, and it is mostly annoying. He would have done better service to the movie by doing a straight impersonation than the acting job he attempts here. Yes, had the film featured more acting and less impersonation this performance may have worked, but as it stands Gad is playing the wrong notes in a B-grade symphony.

Still, there is value to be had watching Jobs, though most of it comes from our own imaginations and Dermot Mulroney as Mike Markkula who, as presented, is the most interesting and complex character the movie has to offer. We are left wondering how the scenes we are seeing actually did play out and we wonder how it must have felt to be in the room during various key and pivotal moments of Apple's rise and fall and rise again.

Movies are supposed to be larger than life, but Jobs somehow makes it all smaller.

Thankfully, John Debney's score helps us experience some of that grandeur that is missing. Do yourself a favor and skip the movie, buy the album featuring the original score from La-La Land Records, and follow along the track listings as the music plays from beginning to end. Imagine what it may have been like at the key moments described in the track listings, especially tracks 7, 8, 11, and 22. Debney's music will give you a glimpse of what a story about Steve Jobs could have been and should have been.

Jobs is a lesson in the fact that, if you're going to make a movie about a great man, it's better to get it right than to get it out first. One's integrity is worth far more than a quick buck.