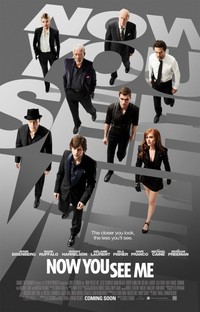 Now You See Me

Review: Now You See Me

The first rule of magic, according to Now You See Me, is to always be the smartest person in the room. However, the first rule of making a movie about the art of magic should be: make sure all your tricks are actually real magic tricks.

Many tricks depicted in the picture are pulled off courtesy of special effects—and obviously so—and they could never be pulled off in real life. The reason such realism is so important in a story about deception and the art of magic is simple: credibility. Without credibility you cannot have believability and without believability, you have a really boring movie.

Fortunately, most of the transgressions in this regard are forgivable (except for the mentalism and hypnosis aspects, which the movie asks you accept on "faith"). So we are, at times, mildly entertained. And when the big reveal happens at the end, there is a kind of Six Sense surprise moment. Kind of.

Couple the CGI enhanced magic tricks with the smarmy and snooty infused dialogue and this story about four magicians who team up to commit robbery in order to join some mysterious magicians club, is not all it pretends to be.

The screenwriters want us to be sympathetic to the magicians' cause, and if you don't stop to think about what they are actually doing for a few minutes, it is easy to get sucked into their tricks and be sympathetic to their mission. But once the credits roll, you realize that just about everyone involved here should probably be in jail.

And these magicians are committing these crimes—why? Just to be member of some magic elitist club? I don't know about you, but if my favorite club asked me to rob a bank in order to join them, I would not want to be a member.

"The closer you look, the less you see," is a line repeated throughout in reference to pulling off a good magic trick. With respect to the meaning of this story and how well it is constructed, that is also absolutely true.

In the end, expect a somewhat of a pleasant surprise (qua surprise)—if you can tolerate getting there in the first place. I could tolerate it, but just barely.

This movie was screened at the reviewer's home on a Blu-ray rental disc from Netflix.