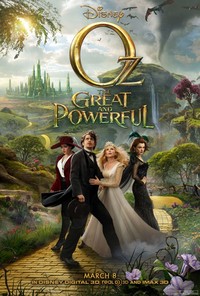 Oz: The Great and Powerful

The Wizard of Oz is probably one of the most beloved films ever made. The 1939 MGM musical starring Judy Garland was based on the first in a series of books about the Land of Oz by author L. Frank Baum, but it wasn't the first film adaptation of one of the novels—nor would it be the last. For years, Walt Disney tried to make an Oz film, but he never quite got there. In 1985, the studio's sequel to the 1939 film, Return to Oz, was not a box office or critical success, and so it would be more than 25 more years before they would revisit the magical land "over the rainbow".

With the success of Wicked on Broadway (and soon to be a feature film as well), which looked at the backstory of the Wicked Witch of the West, screenwriter Mitchel Kapner started looking into writing a script about the origins of the Wizard character, and soon producer Joe Roth was shopping the idea around. It landed at Disney, with Spider-Man director Sam Raimi at the helm. The film tells the story of Oscar Diggs (James Franco), a small-time magician working a traveling circus in turn-of-the-century Kansas. Oscar (nicknamed 'Oz') treats his assistant Frank (Zach Braff) poorly, is a bit of a womanizer and a huckster, and is under the belief that he is destined for greatness. His myopic self-absorption prevents him from making the effort to woo his old flame Annie (Michelle Williams), instead allowing her to go be engaged without even trying to stop her. His dalliances with the circus strongman's wife catch up to him and he's forced to escape in a hot air balloon—just as a storm (and tornado) hit the area. Soon he is whisked away and lands in the colorful and mysterious Land of Oz, where he immediately meets Theodora (Mila Kunis), a Good Witch. She believes that Oscar is referenced in a prophecy about a Wizard who comes from the sky to overthrow the Wicked Witch who killed Theodora's father, the King of Oz. Explaining that the Wizard will get the King's gold, as well as rule the land, Oz assumes the role of a wizard by performing a few parlor tricks. Together, the two of them, along with a talking monkey named Finley (voiced by Zach Braff) travel to the Emerald City where Theodora will present Oz to her sister Evanora (Rachel Weisz). En route, Theodora starts to fall for Oz's charms and when they get to the Emerald City, Evanora recognizes Oz as a threat and questions his motives.

Evanora sends Oz off on a quest to kill the Wicked Witch by breaking her wand and on the way there he realizes the danger he's walking into—the witch has been tormenting the people of Oz and using her winged monkeys to destroy their villages—when he comes across the wrecked village where he helps China Girl (voiced by Joey King), a small ceramic girl who joins their quest. But it turns out that the Wicked Witch isn't so wicked—in fact, it's Glinda (Michelle Williams), the Good Witch of the South. Now Oz and Glinda and their new friends need to figure out who the real witch is, destroy her, and free the people from living under fear of attack. But there are a few twists to come...

For the most part, Oz: The Great and Powerful is great to watch—but only superficially. Raimi embraces the 3D filmmaking to try to make an immersive experience that takes us to a visually fascinating land, but does so at the expense of emotionally connecting to the characters. Franco's Oz is a likeable guy, but that's more to do with Franco himself than with the character, who is a selfish con-man. By the end of the film, he makes sacrifices and finds redemption in ways that are easy to predict, but not necessarily in line with how he was portrayed for most of the film. Kunis is flat as Theodora; it's hard to imagine how she falls in love with Oz so quickly and while she looks great on screen, she doesn't impress with the performance. Rachel Weisz is clearly having fun and there are some nice cameos in the film, but the emotional arcs feel forced, telegraphed, and utterly pedestrian.

That being said, this PG-rated film does have a few exciting sequences and that's where Raimi and his unique brand of filmmaking shine. The camera swoops and yaws and flies through the land, keeping the energy going. Helping all of that along the way is Danny Elfman's magical score: a music box theme that shows up early in the film (written during pre-production) is interwoven throughout the tale and, taken together, the music and the visuals create a very distinctive and somewhat memorable experience. We're treated to a few references to the 1939 film (for instance, Annie is going to be engaged to John Gale—which hints that she might be Dorothy's mother), and the flying monkeys (baboons with wings) are genuinely creepy. It's just a shame that the story is predictable and lacking an emotional arc to latch onto.

Shot digitally on the Red Epic in native 3D, Oz: The Great and Powerful comes to 2D Blu-ray in a pristine encode that is a treat for your eyes. The film starts out in 1.33:1 window-boxed black and white during the Kansas sequences, and once Oz arrives in Oz, the canvas opens up to a very wide 2.40:1, bursting with color. For the most part, the quality of the visuals never disappoints, with deep saturation that replicates every color in the spectrum, without banding or bleeding. The film is intentionally presented in a slightly higher-than-normal contrast, which only occasionally results in a little bit of black crush. Even the Kansas scenes, full of monochromatic imagery, look sharp and crisp and not overly processed. Because it was digitally shot, there is no film grain to speak of and it's a very clean image.

Audio is presented in a dynamic and aggressive DTS-HD Master Audio 7.1 "Near Field" English audio track, optimized for the average viewer's home theater. With non-stop use of the rear speakers, the sound field is immersive and thrusts the viewer right into the Land of Oz. During the action sequences, the subwoofer will get a workout and Danny Elfman's thematic and lyrical score comes at you from all angles. And yet, amidst the whirlwind of sound, dialogue remains centered and clear and you never feel the need to reach for your remote control to adjust the volume (unless the neighbors start to complain).

Released as a 2D Blu-ray/DVD/Digital Copy combo pack, Oz: The Great And Powerful comes to home video with a small but informative number of supplements. The iPad app "The Magic of Oz the Great and Powerful Disney Second Screen," isn't your typical second screen app. In fact, I couldn't figure out the point—it just seems to involve a few screens looking at four locations in Oz, a "Who's Who" of four of the characters (hosted by Finley), and an 'experience' where Finley does a magic trick using your iPad and your screen. I was really hoping for a traditional "Second Screen" timeline experience with video, production artwork, trivia, visual effects progressions, etc. Maybe that will come later, but this feels like a missed opportunity.

On the Blu-ray itself, we get an interesting look at the history between Disney and Oz in "Walt Disney and the Road to Oz" (HD, 10-min), which takes us from the 1930s when Walt first looked into making Oz an animated film, all the way through to this new film. "My Journey in Oz, by James Franco" (HD, 22-min) features Franco himself interviewing Raimi and other cast and crew members as they work on the film. It has a very 'home video' amateur quality to it, which lends it some charm. Since this is Franco's fourth film with Raimi, everyone felt very comfortable around the camera and it gives a unique fly-on-the-wall view of the production from the lead actor's perspective. "China Girl and the Suspension of Disbelief" (HD, 5-min) takes a look at how this character came to life with an impressive combination of actress Joey King's vocal (and facial) performance, on-set puppetry, and computer animation.

The look of the film and the visual effects are explored in "Before Your Very Eyes: From Kansas to Oz" (HD, 11-minutes). This featurette looks at the extensive preproduction work, set design, costume work, visual effects and more that all helped bring the magical land of Oz to life. "Metamorphosis" (HD, 8-min) looks at the make-up effects done by Howard Berger to bring the Wicked Witch to life, without burying the actress underneath all the prosthetics.

Finally, we get a featurette on the music: "Mr. Elfman's Musical Concoctions" (HD, 7-min) features composer Danny Elfman discussing how he got on board the project, what it was like working with Raimi again, how he came up with the music box theme for the production and the surprisingly smooth experience he had on the project. The interview is supplemented with behind-the-scenes videos from the scoring sessions, which is always a nice thing to see. Finally, a set of "Bloopers" (HD, 5-min) shows some of the silly moments that happened on set while the camera was rolling. Sadly, as expected, there is no trailer included.

Oz: The Great and Powerful is a fun, but ultimately flat, look at how the Wizard came to Oz, and the Wicked Witch of the West came to be. All the visual spectacle is on the Blu-ray, with great visuals and engaging audio, but that doesn't make up for the somewhat weak attempt making the Wizard's journey one of redemption. The supplements are satisfying, though a commentary and more extensive Second Screen experience would have helped. Rent this one first, but definitely check it out!