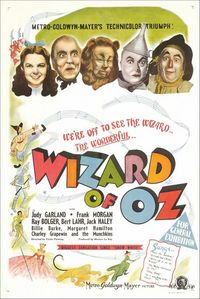 The Wizard of Oz

To call The Wizard of Oz a "timeless classic" is a bit of an understatement. Based on the L. Frank Baum novel, this musical has entertained millions of people, both young and old, for 70 years.  We all know the story: young Dorothy Gale (Judy Garland) is swept by a tornado to the magical land of Oz with her dog Toto, where her house accidentally lands on the Wicked Witch of the East, killing her. While proclaimed a hero by the Munchkins, she immediately gets on the bad side of the Wicked Witch of the West (Margaret Hamilton) when the Good Witch of the North, Glinda (Billie Burke) gives her the coveted ruby slippers.  Dorothy is advised to follow the yellow brick road to the Emerald City, where the Wizard could help get her back to Kansas.  Along the way she meets up with the brainless Scarecrow (Ray Bolger), heartless Tin Man (Jack Haley) and Cowardly Lion (Bert Lahr), who join her on her journey, since they all want something from the Wizard too.  Along the way, the Wicked Witch of the West throws all manners of obstacles in their path, trying to get the ruby slippers back.

A classic MGM musical, The Wizard of Oz uses songs to progress the storyline, and features the now immortal Oscar-winning song, "Over the Rainbow", among many others.  In 1980, The Wizard of Oz became the first VHS release from MGM/CBS Home Video, and over the next 30 years, received numerous re-issues on various home video formats.  In 1991, a laserdisc box set called Ultimate Oz was released, with numerous extras, most which were carried over to the 1999 DVD release.  Then in 2005, a new restoration effort was made on the film, and released as a special edition DVD set with additional extras.

Now, in time for the 70th Anniversary of The Wizard of Oz, Warner Brothers has done an extensive new restoration effort on the film, starting with a jaw-dropping 8K transfer of the original camera negatives.  From that, cleanup was done, and a 4K master was made for meticulous color correction.  The new Blu-ray (and DVD) release uses this new transfer, and it's truly a phenomenal result.  Let's be fair - this film is 70 years old, and so it will never look like it was shot last year.  The film grain is present, but never overwhelming.  The clarity and sharpness of the image is what blows it all away.  The sepia-toned Kansas sequences feel natural and crisp, and when the color appears in the film it is vibrant and deeply saturated.  You can see the freckles on Judy Garland's face; you can see the mole and hair on the Wicked Witch's chin; you can see all sorts of details that you probably never saw before.  The optical effects are a little dirtier than the rest of the film, but all in all, this is a spectacular transfer and restoration.  I can't wait to see what Warner Home Video did with Victor Fleming's other 1939 classic, Gone With the Wind, which went through the same new 8k Technicolor restoration efforts and comes out in November.

In 2005, a new 5.1 surround sound mix was created from the original audio elements. We're presented now with a Dolby TrueHD encode of that surround mix, allowing for the best possible quality of the audio presentation.  A Dolby Digital track of the original mono audio is included for purists, as well as mono tracks in French, German, Italian, Spanish, and Portuguese.  The 5.1 track is not going to blow you  away, and it's primarily front-heavy, but it sounds quite good, with limited but effective use of the surrounds and subwoofer during some of the more engaging sequences.  And if that were all that was included on the Blu-ray, that would have been enough - but we've barely scratched the surface.

For the special features, we start with the previously released material. A feature-length audio commentary track, carried over from the Ultimate Oz laserdisc (and 2005 DVD) hosted by Oz historian John Fricke, this commentary features archival audio from twelve people, including some of the actors and crew members, and it's a great track to listen to - chock full of information.

The 1990 Angela Lansbury-hosted documentary "The Wonderful Wizard of Oz: The Making of a Movie Classic" (SD, 51-minutes) looks at the production of the film, as well as the lasting effects it had.  It's a bit dated, but full of some great stories and behind-the-scenes information.  "The Art of Imagination: A Tribute to Oz" (SD, 30-minutes) is a featurette from the 2005 DVD release, hosted by the late Sydney Pollack, talks with current filmmakers and actors about the legacy of the film and the effect it has had on filmmaking even today.  "Because of the Wonderful Things It Does: The Legacy of Oz" (SD, 25-min) continues this theme, with a look at the way the film has created a huge fan base and merchandizing bonanza.  "Memories of Oz" (SD, 28-minutes) is a 2001 featurette that talks with a few of the (at the time) surviving cast and crew members, reminiscing about their experiences on the film.

"The Wonderful Wizard of Oz Storybook" (SD, 11-minutes) is an abridged "motion comic" version of L. Frank Baum's original story, narrated by Angela Lansbury. "Prettier Than Ever: The Restoration of Oz" (SD, 11-minutes) is the 2005 featurette about the restoration efforts taken at that time for the new 4k transfer and 5.1 sound mix. Oddly, the discussion of the video restoration is completely irrelevant, since this new Blu-ray is sporting a 2009 8K source transfer, nothing of which is mentioned on the box set!!  However, the audio restoration segment is still applicable, and quite interesting to see how they managed to make a new 5.1 mix from 1939 mono elements.  "We Haven't Really Met Properly" (SD, 21-min) provides nine mini biography bits, narrated by Angela Lansbury, for the main cast of the film.

Audio supplements include the aforementioned mono audio track, as well as a music-and-effects track (just the film, without dialogue).  The extensive 80-minute "Audio Jukebox" is included from the Ultimate Oz laserdisc, which includes raw audio outtakes of the songs and score - it's a fascinating archive!  Also included is "Leo is On the Air Radio Promo" (12-min), which is an extended radio advertisement for the film; the entire "Good News of 1939 Radio Show" (61-min), where the cast of the film was interviewed; and impressively, the full December 25, 1950 "Lux Radio Theater Broadcast" (61-min) in a radio version of The Wizard of Oz, featuring Judy Garland.  Additionally, a "Sing Along with the Movie" option lets you have karaoke-styled subtitles pop up with the songs, but it doesn't remove the vocals for a true karaoke experience.

Continuing the slew of extras on the first disc, "Another Romance of Celluloid: Electrical Power" (SD, 11-minutes) is an archival short that looks at how electricity helps Hollywood make films.  "Cavalcade of the Academy Awards Excerpt" (SD, 2-minutes) is a quick look at the 1940 Oscars, where The Wizard of Oz won a few trophies.  "Texas Contest Winners" (SD, 1.5-minutes) is a quick look at a bunch of Texans who won a visit to MGM in 1938 and encountered Oz in production. "Off to See the Wizard" (SD, 4-min) is a look at the 1967 ABC cartoon segments created for an hour of family films.

A collection of  18 still galleries are included, all in SD, covering all manner of the production, and six trailers (SD, 10.5-minutes)  are also included, rounding out the promotional materials.  In the "Additional Footage" section, we're treated to composer Harold Arlen's Home Videos" (SD, 4.5-minutes) of behind-the-scenes material, which gives us a glimpse of what it must have been like making the film.  "Outtakes and Deleted Scenes" (SD, 14-min) includes extended material cut from the film, including some of the infamous "Jitterbug" sequence.  Finally, for this disc, "It's a Twister! It's a Twister! The Tornado Tests" (SD, 8-minutes) includes the raw footage shot for the groundbreaking visual effects sequence in the film.

The second disc stars out with three newly created extras for this release.  "Victor Fleming: Master Craftsman" (SD, 34-minutes) which is a rather interesting and well presented look at director Victor Fleming's life and career.  "L. Frank Baum: The Man Behind the Curtain" (SD, 28-minutes) is a similarly engaging look at Baum's life and legacy.  "Hollywood Celebrates its Biggest Little Stars!" (SD 16x9, 10.5-min) is the only widescreen extra included, and is a tribute to the last surviving Munchkin cast members.

Included for the first time ever is the rather cheesy 1990 television film The Dreamer of Oz (SD, 92-minutes). Starring John Ritter, Annette O'Toole and Rue McClanahan, this L. Frank Baum bio-pic is a little messy, and has horrible video quality, but sports a great Lee Holdridge score.  Next up we have an astounding collection of historical silent films: 1910's The Wonderful Wizard of Oz (SD, 13-min); 1914's His Majesty, The Scarecrow of Oz (SD, 59-minutes) and The Magic Cloak of Oz (SD, 43-min) - which were both produced and written by Baum himself; 1914's The Patchwork Girl of Oz (SD, 51-min) based on the Baum novel, and finally, 1925's The Wizard of Oz (SD, 71-min), a proper silent film version of the original novel.  Also included is the 1933 Technicolor animated short The Wizard of Oz (SD, 8-minutes), created by Ted Eshbaugh.

Finally - as if there hadn't been enough material to keep you busy already - the massive 1992 documentary MGM: When the Lion Roars (SD, 360-minutes) is included on a double-sided DVD.  Narrated by Patrick Stewart, this is an extensive and fascinating look at the rise - and fall - of Metro-Goldwyn-Mayer. It's a great extra, worthy of its own release!

But while that might be all for the video extras (a fourth disc including a Bonus Digital Copy is included as well), the 70th Anniversary Box Set is a limited edition that comes with a few physical extras.  A replica of the complete campaign book used to help theater owners "exploit" the film as best they could.  A re-print of the budget sheet, as well as a 50-page full color hardcover book looking behind-the-scenes of The Wizard of Oz are also included. Finally, a very nice collectible 70th Anniversary watch is provided.

While it's a bit of a shame - although understandable - that they didn't go back and do HD transfers of the film-based extras, Warner Home Video has done a spectacular job at presenting The Wizard of Oz in the best form available.  It looks and sounds great, and they've assembled nearly all of the extras that had been released on the previous Oz DVDs  - as well as a few new goodies - into one Blu-ray package.  (All that we're missing, I believe, is the commentary track by film historian Ron Haver, and the excerpts from the 1903 stage production which were included on the 1989 Criterion Collection laserdisc release.) For those who are a little reluctant to spring for the collectors box (limited to 243,000 copies), hopefully they will release a movie-only version of the film on Blu-ray; it's certainly worth seeing and a must-have for all families.