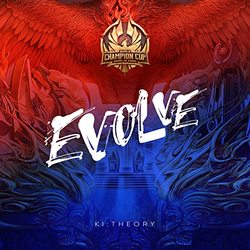 Unisonar, a Los Angeles-based music label, music production company, and publisher will release Evolve, the official theme song for the upcoming esports mega-event, the 2020 Honor of Kings World Champion Cup. The track features U.S. recording artist, Ki:Theory and was produced by Unisonar, in partnership with TiMi Audio, part of TiMi Studios' award-winning game development team and a subsidiary of Tencent Games. The track was selected after a multi-month process including a review of more than 100 songs. It is intended not only to support one of the largest esports events on the globe but also specifically to bring cheer to the world during the worldwide Covid-19 pandemic. The track will be available globally on major digital platforms.

Honor of Kings is a multiplayer online battle arena (MOBA) mobile game developed by Timi Studios and published by Tencent. With tens of millions of daily active players, it is one of the biggest - and most profitable - games in the world, with over 1.6B USD in sales 2019. The World Championship Cup is a franchised competition with 12 teams competing for $4.5M USD in prize money.

"This is a major competitive event and we hope to convey the spirit of the Honor of Kings World Champion Cup through the song: indomitability, courage, and fighting spirit," Sam Yang, head of TiMi Studios Audio Center said. "The song's rhythm and mantra, 'Fight for What, What We Want,' is a rallying cry to cheer for your favorite players and teams.

"This song illustrated the positive energy we are all looking for during the global pandemic," Vivita Zheng, the music producer of Unisonar said, "Picking a theme song isn't just about finding something that motivates, it needs to speak to this moment in time."

Ki:Theory is a recording artist and producer whose credits include remixes for Daft Punk, Cypress Hill, Rob Zombie, Hans Zimmer, and Brazillian Girls, among others. His music has been featured in soundtrack albums for Tron: Legacy, Pirates of the Caribbean: On Stranger Tides, and in numerous other TV, film and game projects.

"Being a gamer myself, I'm stoked to work on such a massive game franchise as Honor of Kings," Joel "Ki:Theory" Burleson said, "It was great working with TiMi Studios and Unisonar, who show their clear passion for the game and a desire to create great music for it."