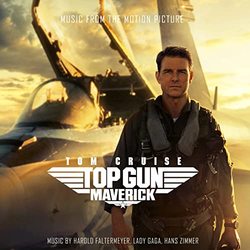 Interscope Records will release Music From The Motion Picture Top Gun: Maverick on all DSPs and in stores on May 27. Available at all digital retailers, as well CD, the soundtrack is available for pre-order now. Arriving as one of the most anticipated blockbusters of the year, Paramount Pictures will release the upcoming major motion picture Top Gun: Maverick in theaters nationwide the same day.

With a combination of classics from the original film, new music, and score, the album reflects Top Gun's past, present, and future all at once. It boasts instantly recognizable cuts such as the theme song "Danger Zone" by Kenny Loggins, while Top Gun: Maverick star Miles Teller recorded a show-stopping live rendition of "Great Balls of Fire" showcased in the film and included on the record. Plus, it features original score tracks by the movie's composers - Lorne Balfe, Harold Faltermeyer and Academy Award winners Lady Gaga and Hans Zimmer.

Producer Jerry Bruckheimer added: "This album continues the musical legacy that the original Top Gun ignited back in 1986. We are so thrilled to have Lady Gaga and OneRepublic lend their artistry towards putting a modern spin on the already iconic and beloved soundtrack."

Making waves already, Hold My Hand was written for the motion picture and is featured throughout the film. The motion picture version of "Hold My Hand" features additional production and score by Lorne Balfe and Academy Award-winner Hans Zimmer. It also marks Gaga's return to writing and producing original music for film, after the success of 2018's A Star is Born soundtrack that earned Gaga an Academy Award, four GRAMMYs, a BAFTA Award, a Golden Globe Award, and Critics' Choice Award.