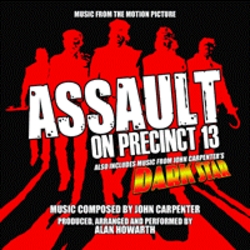 A common denominator for both Dark Star and Assault on Precinct 13 is John Carpenter, who directed, helped to write the scripts and composed the music for both films. These early scores contain a number of musical devices, techniques and ideas that would begin to define the Carpenter sound familiar to fans of his subsequent films like Halloween and Escape from New York. The new performances on this recording have been recreated from Carpenter's original tracks by pioneering electronic musician Alan Howarth.

Subsequently a composer of many films on his own, Howarth, began working with Carpenter in 1981 on Escape from New York, a relationship that continued through They Live in 1988 and thus Howarth came to understand Carpenter's style and technique intimately. When asked to reinterpret the music from Dark Star and Assault on Precinct 13, as he had with BUYSOUNDTRAX Records' previous recording of music from The Thing, Howarth brought with him that experience and understanding. As both scores were recorded originally in mono, this project also represented an opportunity to present the music in a new stereo recording.

Alan Howarth, in addition to being a composer, is an accomplished sound designer and editor, having worked on films such as Star Trek: The Motion Picture, Poltergeist, Total Recall, Army of Darkness, Bram Stoker's Dracula, Stargate and many others. He has been a frequent music collaborator with John Carpenter on his films beginning with Escape from New York in 1980 and including Halloween II & III, Christine, Big Trouble in Little China, They Live and Prince of Darkness and Alan has scored many films on his own, including The Lost Empire, Retribution, Halloween 4 & 5, The Dentist, Headless, Boo! and, most recently, Evilution and Basement Jack.

Both Assault on Precinct 13 and Dark Star have been released on compact disc in the past but are difficult to find, especially Dark Star, which was briefly presented as a lengthy suite of music, dialogue and sound effects from the film. BUYSOUNDTRAX Records is proud to present new recordings of both scores, in stereo for the first time, along with a new recording of the song "Benson, Arizona" from Dark Star, produced and arranged by composer Dominik Hauser. The booklet features exclusive liner notes by Randall Larson, including new comments from Alan Howarth on the creation of this project.

Assault on Precinct 13 / Dark Star is a limited edition release of 1500 units.