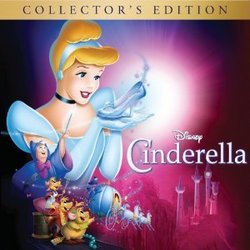 Walt Disney Records honors one of the most celebrated soundtracks of all time with the release of the Cinderella: Collector's Edition. The 24-track album features the original Cinderella soundtrack, with music written by Mack David, Jerry Livingston and Al Hoffman, plus Disney The Lost Chords: Cinderella, a collection of rare original production demos and brand new recordings of those unused songs.

From the album's liner notes, Thornton explains The Lost Chords: "As part of this Collector's Edition we've included the composers' original demo recordings for seven songs intended for Cinderella —some dating from the earliest stages of the film's development. Unfortunately, time has taken a heavy toll on these old 'records', and some were even pieced together from broken shards. But we've managed to restore them as best we can, save for a missing piece here and there. In addition to these historic demos, we've had the unprecedented opportunity to record and present these songs in a way they may have sounded if they remained part of the film—fully orchestrated versions we hope finally give voice to songs that have remained silent for more than sixty years."

Russell Schroeder provides an overview of The Lost Chords project as well as background on each demo. Schroeder worked as an artist for The Walt Disney Company for twenty-nine years. In addition to Disney's Lost Chords Volumes 1 & 2, Russell authored several other books including Disney: The Ultimate Visual Guide, and Mickey Mouse: My Life In Pictures.