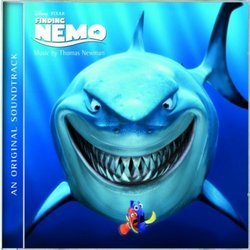 In Pixar's fifth feature collaboration with Disney, Finding Nemo tells the whimsical underwater tale of a clownfish father, Marlin, in desperate search of his lost son Nemo. Marlin (voiced by Albert brooks) is not alone in his search however, for the film sees him aided by hapless and slow-witted Dory (Ellen DeGeneres) in what surely marks yet another summer box office success for Pixar, ensuring that there is perhaps no foreseeable end to the company's talent for refreshingly innovative ways to tell lovingly simple stories at heart.

For the first time, a Pixar feature comes without the musical assistance of composer Randy Newman. Although John Barry steps in to score Pixar's 2004 feature, The Incredibles, Finding Nemo keeps it in the family for now with the producers seeing the baton passed down from Randy to his younger cousin Thomas Newman.

In the disc's liner notes, director Andrew Stanton is quick to note how he actually wrote Finding Nemo's screenplay to past works of Newman's before going on to champion the composer's talent in what he describes as the bittersweet blend "where beauty and sadness are never too far away from each other." He's not wrong in such a description if truth be told, as Finding Nemo carries that distinctive Thomas Newman sound in what is, at many times, a beautifully eclectic score presenting Newman's well-established abilities to combine the quirky and the poignant.

An interesting trend some Thomas Newman fans may have noticed is that, from time to time, albums released of his scores are briefly interspersed with a single brief dialogue sound bite (Meet Joe Black's "Yes" immediately comes to mind) and even atmospheric sound effects (perhaps witnessed most blatantly in the CD release of The Horse Whisperer score). Finding Nemo actually sees a return to this, albeit it ever so subtly, and here, tiny hints of the two elements are kept from ever intruding upon the actual music.

Naturally, the theme for Finding Nemo itself makes a regular appearance within the score, though Newman is quick to underplay it at first and let it build gradually as things progress. The theme is really quite beautiful, and a motif one really cannot describe without harking back to Stanton's description of bittersweet. So then, one would be right to expect the typical Thomas Newman fashion of sweeping strings and piano, but "typical" is not to say it as if it were a bad thing. Newman's sweeping motifs seem entirely fitting, dictating that perhaps with Finding Nemo, Pixar are perhaps looking to take things to a higher emotional level than in their previous films.

Beauty in music seems second nature to Thomas Newman then, so what else does the score exactly have to offer? The answer is actually quite a lot. It would be hard to doubt that a great amount of fun was had in writing and recording the score for Finding Nemo, and the animation medium seems to have allowed Newman to go places we've rarely, if ever, heard him go before ("Foolproof") is oh so short, but brilliant). One can turn to one of the score's longer cues like "Darla Filth Offramp" and find it difficult not to smile in its attention-grabbing opening, through to its wonderful surfer dude guitar motif that culminates in a stirring rendition of the score's reoccurring brass fanfare.

Newman does, here and there, allow himself to get rather cartoony with the odd motif, but surprising was how dark and brooding he lets some of the score remain in putting forward a fitting sense of imminent danger in a number of cues. Whilst yes, there is little denying that so much of the score is adorably sweet natured, Finding Nemo sees an incredibly varied gamut of emotions musically at play here, ensuring that the score isn't the completely light and fluffy affair some may have predicted.

On a technical note, the score for Finding Nemo has been well mastered for its CD release, providing clear and precise separation of the orchestra sections across the soundstage in what is a substantially open and natural recording with some deep, but never intrusive, bass.

I suppose most parents will take comfort in the fact that after seeing this film, their children will likely be demanding a fish for a pet instead of a puppy. And why not? It's less to clean up to be sure. It is the hope of this reviewer that not only he get some fish next Christmas, but that this not be the last collaboration between Pixar and Thomas Newman. The experience of sitting to listen to the music of Finding Nemo has proven to be nothing short of delightful. Bravo!