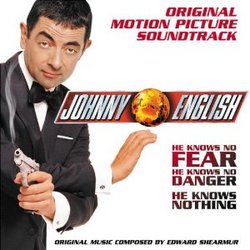 Johnny English is yet another spoof on the James Bond franchise, but Edward Shearmur takes his scoring duties a bit more seriously than most parody-composers do. Shearmur's main theme is full of the brassy jazz action motifs of John Barry's early Bond scores, while also blending in some of the more electronic elements David Arnold has incorporated into the more recent installments, along with a heavy use of electric guitar and percussion along with the brass. Many parallels can, of course, be drawn to George S. Clinton's music for the Austin Powers franchise. However, Shearmur captures the feel of the Bond scores from the bold main theme to the slower, romantic jazz cues, as in "A Man of Sophistication" and "Cafe Conversation". In addition, the soundtrack album is also structured like a James Bond soundtrack release, with a couple of songs - including "A Man for All Seasons" performed by Robbie Williams and co-written by Hans Zimmer - that also reflects the upbeat, jazz-based soundscape created for the film. The salsa version of the main title theme, performed by female pop-string quartet Bond (appropriately named) is a fun song to listen to as well.

While Shearmur is proving himself to be somewhat of a chameleon in the film music industry by scoring projects in a new genre with every assignment, his bold use of brass and percussion ("Truck Chase") and widely used themes keep his scores from sounding too unoriginal. One of the best cues on the album is "Parachute Drop" which combines all the elements of the score, beginning with upbeat percussion before the main theme comes in on the electric guitar. The theme then passes to the brass and strings in one of the better performances of it. Some mysterious vocals and chimes pervade "Pascal's Evil Plan" but the brass is never far away. The score changes tone a bit towards the end in "Riviera Hideaway" with a solo trumpet and piano taking over.

The final track is annoying because there is a good nine minutes of silence between the electronic end title cue and the piano "bonus" that comes at the end of the fake fifteen minute track. If you can cue the song to stop after four minutes, "Agent No. 1" is enjoyable, but do not be fooled by the play time of the album, as it is nine minutes shorter than it looks. Overall, a strong effort from Shearmur with plenty of fun action music to satisfy any Bond fan. However, for a parody film, I would have expected and appreciated a bit more of that genre represented in the film. Shearmur had fun with the music, but not in the same way Harry Gregson-Williams and John Powell did with Shrek. The Johnny English score could have accompanied a much more serious spy film. However, in the film itself, it does help to add to English's failures as an agent: the music is as serious as the threat to England.