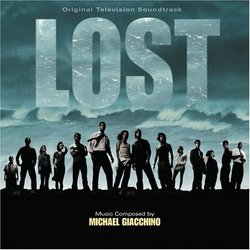 It is hard to describe what "Lost" is about. On one hand, it\'s about the survivors of Oceanic Airlines 815, which crashed on a remote island somewhere in the Pacific Ocean between Sydney and Los Angeles, and their struggle to stay alive and deal with strange monsters, and a mysterious group of "others" who are on the island, with a predaliction towards kidnapping children for some nefarious and unknown purpose. On the other hands, it\'s about the flashbacks, which take us into the past of each of the main survivors, giving us insight into their personalities and how they might have been connected to each other long before the fateful flight. Usually this comes with some sort of revelation (to the viewer) and a twist, with makes us question most of what came before.

Co-created by J.J. Abrams ("Alias"), the music for the television show was just as important as any of the actors. Hired to provide a unique sound was "Alias" composer Michael Giacchino. Giacchino\'s orchestra is not your typical one - it is comprised of strings, trombone, harp, guitar, and percussion. The resulting sound is so uniquely identifiable as being from "Lost" that even my friends who watch the show and have little interest in film music have commented on the score. Abrams, a man who seems to be able to do almost everything, composed the show\'s opening titles (he also wrote the main title theme for "Alias"), which he also designed. On the surface it seems like little more than a swelling chord cluster, but if one listens closely, there\'s a lot of stuff going on there.

The score cues begin with "The Eyeland", a sparse cue that slowly builds as live percussion comes in, and the strings swell. Soon it emerges as a tense piece, and the trombones give us their trademark falloff (a unique identifier in the music from "Lost"). This goes right into "The World\'s Worst Beach Party", a dissonant and percussive cue that effectively underscores the post-plane crash turmoil on the beach.

The main theme for "Lost" is first heard in "Credit Where Credit is Due", a lush string-heavy melody, appears in "Just Die Already" and later on, as an Asian variation in "Departing Sun". The other main theme heard on the show is the "Life and Death" theme, which is also heard in "Win One for the Reaper".

There are plenty of cues that build up the tension, and even a few fast-paced action ones. "Run Like, Um... Hell?", "Me and My Big Mouth", "Proper Motivation", "Run Away! Run Away!" and "Getting Ethan" stand out, culminating with "Monsters Are Such Innnteresting People". The use of dissonant trombone clusters, exotic percussion (including a unique metal anklong) and string ostinatos is spectacular, and we\'re even treated to the occasional trombone falloff, for extra measure.

Some of the cues don\'t fall into any particular category, and usually accompany flashback segments. "Crocodile Locke" is a slow string piece, "Kate\'s Motel" is a string heavy piece influenced (intentionally) by the music of Bernard Herrmann. "I\'ve Got a Plane to Catch" is unlike anything else on the album, with a jaunty guitar rhythm, and whimsical melody. I love "Hollywood and Vines", a progressively building adventurous cue that takes place as a team of survivors sets out to explore the island. The last two cues are emotionally powerful, as the first season of the show reaches its climax. "Parting Words" is, hands down, the most powerful cue on the album, building slowly from soft string chords into a large triumphant emotional statement using the entire ensemble. Of course, it wouldn\'t be "Lost" if the album didn\'t end with a hopeful version of the main theme that leads into a sparse variation on the "Life and Death" theme - that suddenly goes south, and leaves us with not only a trombone falloff, but the signature electronic "boom" heard at the end of every episode.

The album, released by Varese Sarabande, is sequenced in chronological order, and cherry-picked tracks in such a way that it would play almost as though it were one big episode, encompassing the events of the first season as one big story arc. As a result some tracks that people were hoping to be placed on the album are missing, because it would break the flow. It\'s a shame, for example, that Locke\'s big emotional cue in the "Walkabout" episode is missing - but a bigger and better version of the same theme can be heard in "Locke\'d Out Again". Also missing is the "traveling" music, and any stuff involving Sayid\'s themes, and a few other bits and pieces.

It\'s always hard to put together a single album that will encompass music from 24-hours of television, but all things considered, the "Lost" album shows us how to do it right. With "Lost", Giacchino is showing us that television can deliver unique and enjoyable orchestral music on a regular basis. Clearly I\'m not alone in this sentiment; he won an Emmy Award for his score to the "Pilot" episode of the show. The album is a solid listen, and is a must-have for any soundtrack collection.