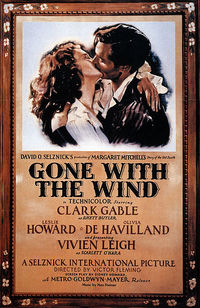 Gone with the Wind

It's a timeless classic, a moving and emotional story about the Old South transformed during the Civil War. 1939's Gone with the Wind still holds the record (when adjusted for inflation) of being the biggest box office hit of all time, and with good reason. Based on the Pulitzer Prize-winning novel by Margaret Mitchell, David O. Selznick's adaptation of Gone with the Wind is well known by now, focusing on Southern belle Scarlett O'Hara (Vivien Leigh) and her rocky relationship with Rhett Butler (Clark Gable).

At times feeling like a big screen soap-opera, Gone with the Wind takes our heroine through times both good and bad, from her idyllic pre-war plantation lifestyle, through the burning of Atlanta and her dealing with the war-torn South. Running nearly four hours, the movie has a few pacing issues, and lags a bit towards the second half - but it never gets boring. There might be a few socially dated aspects to the film, especially in the handling of slavery, but the film is certainly a product of its time. The supporting cast is excellent, and with a wide variety of characters to keep things fresh, and timeless lessons conveyed, it is easy to see why Gone with the Wind has persevered over all these years, and is still considered one of the greatest films ever made.

For the 70th Anniversary of the film, Warner Brothers has gone back to the original Technicolor negatives to give the film the same excellent care and restoration efforts that they had recently bestowed upon The Wizard of Oz. They went through all the effort to do an 8k scan and 4k color corrected master for the film, but on DVD you miss out on the improved detail and resolution. However, the gorgeous transfer still comes through, with sharp details, natural grain, and solid colors. I can only imagine how much better it looks in High Definition.

The audio carries over the same specs as the previous DVD release of the film, with a Dolby Digital 5.1 re-mix, and the original mono track. The 5.1 mix isn't very impressive, largely confined to the front (and even then, heavily in the center), but during some of the battle sequences the rears get a bit of usage. Max Steiner's excellent score is the main feature that benefits from the new surround mix, especially when compared to the mono track.

For special features, it's a shame that this 2-disc release of the film only carries over only one extra from the previous DVD box set. The commentary track by film historian Rudy Behlmer is academic and a bit dry at times, but full of fascinating details and minutia, and serves as an excellent behind-the-scenes audio essay on the making of the film. Nearly every aspect of the production is explored, although with such a long running time, it seems that occasionally Behlmer runs out of steam. Still, this is a great commentary track, and well worth listening to.

With a great transfer and good audio, Gone with the Wind is a classic certainly worth checking out. But with limited supplements (just a commentary) the 2-disc version is pretty much just for those who want the film. For those interested in supplements, they'd need to seek out either the 2004 Collector's Edition DVD, or spring for the 70th Anniversary Ultimate Collector's Edition on DVD or Blu-ray.