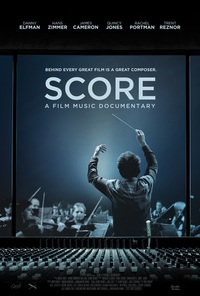 For those who love film music, SCORE: A Film Music Documentary truly inspires.

At last, a light shines upon the composers who bring movies to life. The documentary, SCORE explores the vast universe of film music, wonderfully documenting important landmark scores and featuring vital composers of the past and present.

Approached chronological, the structure emphasizes the development and many changes film music has encountered thus far. The interviews weave seamlessly, allowing room for very few awkward transitional jumps. It is commendable to accomplish such a logical progression in a film where its topic spans for more than a hundred years.

The most savory moments are when the composers are featured on screen. The chronological storytelling approach clarifies the establishment of each individual composer within the era that they were/are well known for. Many great composers were featured in-depth, such as Alfred Newman, Alex North, Ennio Morricone, Jerry Goldsmith, John Williams, Danny Elfman, John Debney, Hans Zimmer, Thomas Newman, Brian Tyler, and Heitor Pereira. Of these composers, the conversations were genuine and personal.

The documentary packs a great deal of unique information which might be unknown to some fans, illuminating unique approaches and secrets never been told before. Each composer approaches a film differently and therefore composes differently. Having an in-depth look at the composers' lives, processes, strategies, and philosophies remarkably enhances the way that their music is heard.

At times, however, some conversations and demonstrations seem unimportant and stretched. Specifically, there is a section focusing on some of the composers' processes and experimental instruments they use. This segment only adds runtime, providing very little substance and did not represent the overall group of composers well.

Although many great composers were featured, it was disappointing that many others were never mentioned. Despite the hour and a half runtime, time could have been better managed in order to include other composers who shaped film music history, such as Miklos Rosza, Maurice Jarre, Basil Poledouris, Elmer Bernstein, Alan Silvestri, James Newton Howard, Michael Giacchino, James Horner (though he mentioned in the end credits), or any music/composer within the world of Disney.

Some composers, such as Patrick Doyle, Alexandre Desplat, and Dario Marinelli, were oddly featured for only a moment playing piano and harpsichord, never to be seen again throughout the entirety of the documentary.

Along with music and composers, the documentary also took a glance at multiple recording stages and methods. This was a nice addition to the film for it provided more background to the performance of the music. Having the ability to show off different recording studios and the way they work help contribute to displaying how big these scores can be.

Aside from the hundreds of players in the orchestra, the documentary explains the various roles in the recording booth, ranging from sound engineer, music editor, score reader, and orchestrator. Those small details, explained by composer Joe Kraemer, are what make the movie stand out. Not only are the less well known roles stated, but they are well elucidated within the process of the recording session itself.

The documentary unexpectedly included a psychologist who presented information regarding how humans interpret music, giving magnificent sensations as an example (i.e. goosebumps). Understanding the neurological effects experienced while watching a film validates the merit of music. How we hear and interpret music is all subjective, but the way film music works within a picture has a definite musical intent. The science presented is very interesting and provides a great deal of significance to what film composers create.

As a side note: One of the most appreciated gestures in the film was made to the late James Horner. At the end of the documentary, during the end credits, there is a conversation with Titanic director, James Cameron. Cameron tells an incredibly heartfelt and meaningful story about his relationship with Horner.

For being one of the few documentary to focus on film music, Score represents the genera admirably. Apart from the few issues discussed above, the documentary does a wonderful job capturing the meaning of film music. From the wide variety of contributing composers, to the expansive venues where they bring the music to life, this documentary is sure to delight fans of film, music, and story.