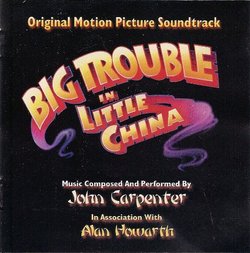 The score for Big Trouble is one of the Carpenter’s stand out compositions to a movie which has generated a huge cult following long after the film died at the box office in its 1986 release.Carpenter working again with longtime partner Alan Howarth has created an indelible fusion of Western rock riffs and rhythms with Eastern melodies to accompany his hybrid kung-fu/ghost/comedy adventure. The score perfectly accompanies the movie’s whacked out sensibilities and often times plays in serious contrast to hilarious goings-on. It’s also one of the reasons it works so well.

The score for Big Trouble marks a departure from the low-key atmospheric music that Carpenter is known for. While he does provide some of his trademark eerie music during Big Trouble’s quieter moments, it’s the action scenes that dominate the movie where Carpenter goes all out. Beginning with Jack Burton’s theme and right on through Lo Pan’s demise, the score is powered by a driving rock beat. The action pieces that encompass the final third of the movie rely heavily on these beats to establish their pacing. With its beats, guitar riffs, and layers of synth keyboards, the music may seem haphazardly thrown together on an initial listening. However, repeated listenings reveal just how well structured and thematically connected those action pieces are.

The score is highly recommended especially for Carpenter and Big Trouble fans.

About this CD: When the movie was released in ’86, Enigma Records (a primarily punk and thrash metal label) put out a CD with 90% of the score on it. Shortly after going out of print a few years later, the CD began fetching prices of $60 on up. Super Tracks Music puts out this version of the score as a Promotional CD.While identical to the previous version and selling for a lot cheaper, it is not the complete score that most of us were hoping it would be. The score is roughly 3:30 minutes longer than the Enigma version with only 1:30 minutes of previously unreleased music. The only track to feature new music is "Lo Pan’s Domain", and it has the music where Jack is rolling backwards down a hallway in a wheelchair. The other track credited with new music is "Escape from Wing Kong" which simply extends some of the riffs and cues over a 2 minute period. And there is also a remixed version of the title song not that we really needed a remix of it.

Super Tracks dropped the ball on this one. There is plenty of music they could’ve included in place of a remix. The quiet pieces which bookend the film would have provided a nice contrast to all the action music. You also won’t find the music during the airport kidnapping.While the CD sounds louder than the Enigma version, it doesn’t sound like it’s been remastered either. Too bad. I guess we’ll have to wait even longer to get a complete version whenever someone decides to release it. For those of us who already have the Big Trouble score, this CD is a disappointment and offers no real reason to buy it. For those who don’t have it, by all means, get it. You won’t find a better or cheaper version.

However, there is one other item on the CD that is of particular importance to Carpenter fans. Along with featuring some so-so music that Howarth did for a movie called Backstabbed, there is an unreleased bonus track from Escape From New York. It’s the music to the deleted Atlanta bank robbery sequence, which we got a glimpse of on the Escape from NY Laserdisc. With its same late 70’s disco beat, it fits in perfectly with the rest of the NY score. Starting off with the wail of sirens it segues into the steady bass of the Duke’s theme. The song is actually reminiscent of Tangerine Dream’s score for Thief. It’s instantly listenable and makes you wonder just how awesome that the scene might have been had they included it in the final cut. For Capenter die-hards this could be reason enough to get this CD. It definitely would be for me.