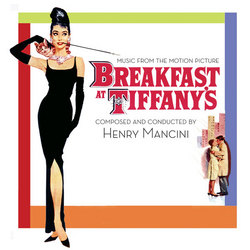 For the 1961 Paramount Pictures' film Breakfast at Tiffany's, Henry Mancini wrote the melody of a lifetime and the score to go with it. Along with lyricist Johnny Mercer, he penned the song "Moon River" and enjoyed seeing it win the 1961 Academy Award for Best Song—and rapidly become one of the most recorded hits of all time. His Academy Award-winning score became equally famous.

As was the norm in those days, Mancini selected approximately half an hour of melodies from the film score and re-arranged them for an RCA album aimed at the easy listening market. While the arrangements made for tuneful listening, the more serious orchestral sequences went unrepresented. Incredibly, while the "Moon River" theme, with its signature harmonica solo representing the lonely melancholy of principal character Holly Golightly (Audrey Hepburn) was the most famous melody in the picture, Mancini chose to leave it off the re-recorded album save for the main title and a cha-cha version. That meant the entire final (and justifiably celebrated) sequence of the picture—the search for "cat," that unforgettable embrace of the two lovers, the beautifully shot closing image of both cat and lovers re-united in the rain—and the dramatic treatment of "Moon River" with its trademark discordant notes of suspense leading to one of the most stirring orchestral crescendos and codas in all film music, went completely unrecorded for the record-buying public. Also gone were all of the lonesome variations of the melody, as well as the dramatic scoring for "Doc" Golightly (Buddy Ebsen), the magnificent parting sequence at the bus station, and many other cues.

For the first time, fans of this moving and magnificent film score can hear the soundtrack versions Mancini composed and conducted for the film—every dramatic cue, all of the sentimental variations, every big band tune and all the other pieces that make up this special soundtrack CD. Working from a number of master materials, including the 35mm three-channel stereo tracks, mono film soundtrack stems, DAT transfers made by Paramount Pictures and a handful of alternate and demo recordings, the entire score was remixed into a rich and rewarding stereo experience (with the exception of three score cues and the variety of extras that appear on this CD). It's everything film music fans could want and it's everything Henry Mancini wrote for this most cherished of never-before-released soundtracks.