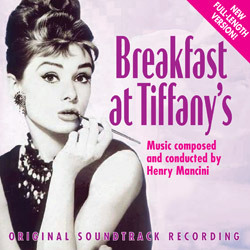 This REVISED EDITION now contains ALL of the ORIGINAL studio score by Henry Mancini.

As well as the delightful version of "Moon River" as sung by Audrey Hepburn in the film, with Johnny Mercer's lyrics, there is also all the party music as well as many incidental cues not on the original album.

For 2014 we have now EXPANDED this release which now comprises 21 tracks including previously unreleased material by Mr. Mancini.

The insightful essay by Randall Larson has also been revised to reflect the new content. We must say that it's a genuine pleasure to revisit a time when things seemed a little bit gentler than they are today. Indeed, notwithstanding Mickey Rooney's somewhat miscast character, it's amazing how little the film has dated!