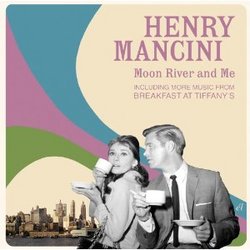 Moon River and Me

Henry Mancini is regarded by his peers, the critics and the public to be one of the giants of popular music. With a singular playfulness and style, "Hank" composed a legacy of music for film which broke with cinema's symphonic traditions and incorporated elements of jazz and popular music.

His theme song for Blake Edwards' Breakfast at Tiffany's, the hauntingly beautiful Moon River (with lyrics by Johnny Mercer), perfectly encapsulates the mood of the era and is amongst the most celebrated compositions of the second half of the twentieth century.

Henry Mancini won two Oscars for Breakfast at Tiffany's; one for Best Original Score, and another for Best Film Song of the Year, Moon River.

Moon River and Me comprises Danny Williams' version of the ballad that reached number one in the UK single chart and Jerry Butler's interpretation that was a hit in America, along with seventeen cues from the original film score of Breakfast at Tiffany's (including Audrey Hepburn's plaintive version of Moon River that the composer insisted was the best) and hip jazz variations on both Moon River and the Breakfast at Tiffany's score by Barney Kessel, Eddie Harris, Art Blakey and Al Caiola.

Adapted from Truman Capote's novella, Breakfast at Tiffany's­ by virtue of the daring naturalness, the elegant minimalist allure of Audrey Hepburn's iconic Holly Golightly—is arguably the first sixties film. As much of a landmark for Audrey Hepburn as it was for Mancini, Tiffany's is the pinnacle of her career and the film's stylistic influences (in attitudes and fashion) continue to prevail.