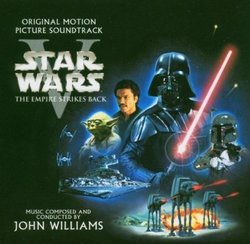 This may be my favorite film score of all time. Not because the movie is the best I've ever seen, but that its musical elements add up as one of the most emotionally well-rounded and satisfying. In the John Williams library. E.T. is more heartwarming and Superman may be more boldly heroic, but the score to The Empire Strikes Back has the widest emotional range of my favorites. It has one of the greatest love themes ever written ("Han Solo and the Princess"), one of the greatest villain marches ("The Imperial March") and a series of the greatest action cues even written ("Asteroid Field", "The Battle of Hoth", the last four tracks of Disc 2). All in the same score.

Like the movie, the score is darker and richer than its predecessor's. The youthful innocence of Leia's theme has been replaced by the more passionate and mature "Han Solo And The Princess", which reaches Aram Khachaturian levels of opera in " The Clash of Lightsabers". The darkness of Vader's theme is much more foreboding and merciless than the simple four note Imperial motif from Star Wars (others can call it A New Hope, I'll call it Star Wars). And rounding it out is the whimsical yet melancholy Yoda theme, which anticipates Williams' work on E.T. two years later. In the "End Credits", the heroic, romantic, magical and tragic elements all play out in the proper proportions and the finale's closing statements complete the score with appropriately full-bodied maturity. It's the best that Star Wars ever got, which is why it is this version that one hears most in Star Wars trailers.

The little details of musical subtext are what add up. Han Solo's daring flying exploits ("Asteroid Field", "Mynock Cave", "Attacking A Star Destroyer") have a wild uncontrollable romanticism to them, emphasizing both the desperate nature of the Millennium Falcon's escapes but also connect Han slowly winning the Princess' heart (as revealed in "Imperial Fleet Deployed"). Boba Fett's two-note bassoon motif suggests his nefarious nature with incredible simplicity. Lando's Bespin theme reveals an idealism in his character ("Lando's Palace") that darkens through his dealing with the Empire ("Betrayal at Bespin") but is then rekindles when he rebels (briefly in the middle of "Clash of the Lightsabers").

If you go through the tracks, there's a large amount of music that was not used in the movie, primarily in the first act (tracks 2-4, and track 11 on disk one). The edits are often small pieces here and there. The fact it was cut has nothing to do with the quality of the music rather I assume to allow the character and atmospheric moments to breathe early in the film. Williams' score takes over for the last 30 minutes of the movie with the exceptions of small suspenseful sections of silence. This sequence (from Han's Carbonite scene through the credits) is one of the best composed two reels of music I have ever heard vacillating expertly between the doomed romance ("Carbon Freeze"), dark foreboding danger ("Darth Vader's Trap"), triumphant escape ("The Clash of Lightsabers"), Vader's shocking reveal ("Rescue from Cloud City") to a desperate last minute escape ("Hyperspace") and the final statement of hope ("The Rebel Fleet/End Title"). That is thirty minutes of perfect music.

This edition is just a commercialized up version of the 1997 RCA/Victor versions only without the fantastic liner notes so I reserve recommending picking this new edition up, perfect as it is. Get the 1997 editions. They are perfecter or more perfect. Whatever.