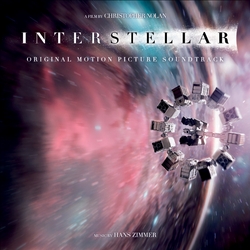 Hans Zimmer has become one of those big name composers, like John Williams, that finds each project of his surrounded by excitement and anticipation. Perhaps his most eagerly anticipated work this year, more so than May's The Amazing Spider-Man 2 OST, would be his work on Interstellar. His fifth time working with director Christopher Nolan finds him delivering a soundtrack that will long be talked about and remembered fondly.

Zimmer's Interstellar is as much of an event as the film itself. Finding it wise to create a separate experience of film and sound, Zimmer, Nolan, and WaterTower Music decided to release the album a full two weeks after the film. The music, released Tuesday, November 18, finds the listener brought on a musical landscape just as beautiful, mesmerizing, and foreign as the film. Hans Zimmer, ever tinkering and tailoring his sound to fit the unique challenge presented within scoring a film, gives us a religious, liturgical soundtrack that doesn't leave our minds.

Interstellar, with its homages to composers such as Gustav Mahler and Richard Strauss, is enough of its own living entity, that to experience the wall of Zimmer-ian sound is just as worth seeing the film presented in 70 mm—if not more so. Zimmer's work is another landmark for modern day film scores as it brings to mind the recognized respect and class of composers long diminished in the eyes of jaded film-goers.

The soundtrack opens with a literal and figurative thunder storm. An important cue from the film, this very earthly tone is the last worldly tether the listener has as the soundtrack progresses to an overwhelmingly welcome journey. Track 1, "Dreaming of the Crash," sets up the tone and heart of the soundtrack and film. At times the few notes are reminiscent of the opening notes of piano work on Inception. Only, while the delicate piano keys lead to massive BRAHMS of bass on Inception, Interstellar sees a few notes of solitary reflection lead to the film's most meaningful voice—the 1926 four-manual Harrison and Harrison organ! Amid a sonic landscape of 34 strings, 24 woodwinds, four pianos, and 60 choir singers, the pipe organ is the star of the piece. Maintaining its presence for the soundtrack's 92:29 length, it returns in Track 3, "Dust," which sounds just like the warm-up so many of us are familiar with as we listened to the organist on Sunday mornings at church. Allowing us time to relax, we are given the classical sounding Track 6, "Message From Home," but we aren't able to fully sit back as Track 8, "Mountains," is perhaps one of the most swirling, tension-building, and incendiary tracks Zimmer has delivered since his work on The Thin Red Line, particularly the track "Journey To The Line." Maintaining the sense of time and the urgency of how fleeting it is, Zimmer keeps pace with a steady clock tick. "Mountains" slowly builds into a faster pace quickly turning into a rousing piece that is one of the highlights. A track of this intensity isn't felt again until much later on Track 14, "Detach."

Hans Zimmer has created a close to perfect musical canvas for those extremely dedicated to the audio experience. The compositional technique on the album may turn off a few, as it is different than Zimmer's recent offerings. However, for those that stick with the album, they will see it "not go gentle into that good night." Zimmer's Interstellar rages!

For those interested in the Deluxe Edition, containing 7 additional tracks, the real highlight is found on Track 23, "Do Not Go Gentle Into That Good Night." It features John Lithgow, Ellen Burstyn, Casey Affleck, Jessica Chastain, Matthew McConaughey, and Mackenzie Foy reciting the Dylan Thomas poem.