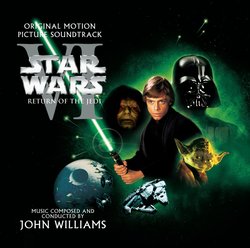 I still miss the "Ewok Celebration Song". You know, "Yub-nub, eee chow yub-nup!" or however it goes. It is cheesy but I feel secure in my masculinity in saying but it is still better than the new-age finale that replaced it in the 1997 "Special" editions.

Return of the Jedi is generally considered the weakest of the original trilogy movies. The new themes introduced in this film (Jabba's, the Emperor's, Ewok's and Luke & Leia's) are great but they are more simplistic, much like the movie. The Emperor's theme while effectively creepy doesn't overwhelm the Vader's much more complex motif as it should. And Luke and Leia's theme while lovely isn't utilized much in the film. But these are mild comments compared to excellence of the score.

What really makes the album memorable is the careful interweaving of the dozen or so leitmotifs developed through the series. Williams has carefully thought out the thematic progression of the three movies. Again you have over thirty minutes of sustained climatic music ("Battle of Endor" suites one through three) that tie all of the music together, cutting back and forth expertly with utter clarity between the final confrontations between the fleets in space, the forest battle on the planet below and the mythically confrontation between Luke, Vader and the Emperor.

This is still Williams at his peak as there are some series highlights: Luke and Vaders' final choral confrontation in the middle of "The Battle of Endor II", "Light of the Force" completes the Force theme with somber reflection and the action cues are still at the top of their class.
The strings and brass sections rise and fall rapidly through the space battle sections of the Battle of Endor, capturing the swooping maneuvers of the smaller spaceships between the colossal Star Destroyers then contrasting that with the tribal rhythms and wood percussion of the Ewoks guerilla warfare in the forests (with an occasionally comical burst of horns). When the tide finally turns ("Battle of Endor III"), the score reaches appropriately back to "Tie Fighter Attack" for the final triumph of the Rebellion against the Empire. Smaller cues like "Shuttle Tydirium Approaches Endor" still reveal Williams' character genius, intermingling the Rebel Mission motif with the Emperor's theme and Darth Vader's detailing Vader's inner turmoil.

Like Star Wars and Empire Strikes Back, if you have the 1997 RCA/Victor version of this score already there's no need to get it again. Of course we are missing out on tracks like "Lapti Nek" and "Ewok Celebration" but as we all know, they no longer exist from Lucas' perspective. You still get the alternate cue to "Sail Barge Assault"(which I prefer), "Forest Battle (Concert Suite)" and several source cues. The fact that these new releases are still in the older arrangements is a testament to the fact that they were done right the last time. I hope that the eventual two disk editions of Attack of the Clones and Revenge of the Sith are more up to the standard of these editions than the sloppy The Phantom Menace Ultimate Edition release.

This score and Indiana Jones and The Temple of Doom ended the epic nine year run of John Williams that started with Jaws. Just look at the rest of the work produced in that time: The Star Wars trilogy, Superman, Raiders of the Lost Ark, E.T., The Fury, Dracula, Close Encounters of the Third Kind, Family Plot, 1941 and yes, even Heartbeeps. No other film composer has ever created a series of scores so memorable and influential as the work in those years. I suspect no one can.