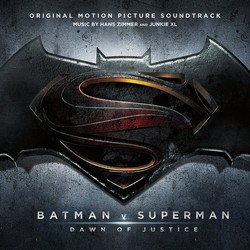 For those wondering what happened to the iconic and almost certainly infamous sounds of Inception, the loud and awakening percussion of Hans Zimmer that was largely absent on releases such as The Amazing Spider-Man 2 and Interstellar, look no further than Batman v Superman: Dawn of Justice by Hans Zimmer and Junkie XL (Tom Holkenborg). The eagerly awaited soundtrack to one of the most eagerly awaited blockbusters is finally upon listeners' ears but does Zimmer and Holkenborg's Batman v Superman hold up to the masterful Interstellar? Is it as rousing as Holkenborg's Mad Max: Fury Road? Does it live up to the promises made to us of a new, dynamic sound of Superman in Man of Steel? Let's take a look at each track and find out.

1) Beautiful Lie – The very opening of 'Beautiful Lie' is jarring, loud, and all and undeniably Junkie XL. Bringing to mind some of his work on Mad Max: Fury Road, the track introduces us (more so teases) the new Batman theme from Batman v Superman. The rest of the track delves into a beautiful mashup of both Zimmer and XL's talent; they give us an overall track with heavy Inception and Run All Night qualities. The usage of the choir is haunting and at 3:12, XL's usage of horns remind us that our new theatrical Batman's story isn't just beginning. It's been ongoing; he's older and more the war weary battle vet than of any presentation we've seen before.

2) Their War Here – Possibly better fit as the soundtrack opener, Zimmer and XL work together in creating a proper opening salvo to the greatest gladiator match. Building up to our first introduction to Bruce Wayne, every instrument flutters together to give us a sound of bats flurrying. We then get another hint of the Batman theme that immediately stops and fades with three notes on the piano. 'Their War Here' then restarts with building percussion that brings us back to 'General Zod' and 'Arcade' from Man of Steel. It's enough to excite music fans of Man of Steel, Zimmer's first foray into Superman and the DC Films universe. Junkie XL smartly pays homage to the Shirley Walker/Danny Elfman Batman: The Animated Series theme and it is bound to bring not only a tear but a gigantic smile to every Bat fans face. 'Their War Here' is an excellent Zimmer-ian/XL track and stands out for all the right reasons on the Batman v Superman soundtrack. At 3:40 to conclusion, the track turns somber and gives us one of the main recurring themes that we'll hear later on in the soundtrack.

3) The Red Capes Are Coming – Zimmer, reminding us of his musical genius, begins the third track with the piano notes from Man of Steel, however it's played backwards and on a detuned piano. Giving the Superman theme a more demonic sound, 'The Red Capes Are Coming' then builds into a theme sounding as if it could have appeared on either Sherlock Holmes or Sherlock Holmes: A Game of Shadows. The usage of violins and piano give us a bit of a psychotic and unbalanced sound; one part mad scientist and one part sociopath. Undeniably Lex Luthor, Hans Zimmer presents a track just as great as "What Are You Going To Do When You're Not Saving The World?" – one that rivals John Williams masterful Lex theme from Superman: The Movie. Track 3 concludes with a beautiful finish and, at this point, stands out as the album's best.

4) Day Of The Dead – All Zimmer here. Track 4) Day Of The Dead brings listeners back to the musical landscape of Man of Steel and gives us 'Look To The Stars' and 'What Are You Going To Do When You're Not Saving The World?' Yet, instead of just re-presenting Superman's theme from 'What Are You Going To Do...', Zimmer plays us a more melancholy version that's slower in nature and reaches his 'Journey To The Line' heights from The Thin Red Line. This is actually the only time Superman and Man of Steel fans will hear the Superman theme in full, albeit a variation of it.

5) Must There Be A Superman? – It's hard to define this track as it's the first truly bizarre. Bringing to mind a little electronica from Zimmer's M:I-2 track 'Bio-Techna,' it's very likely that Track 5 is more Junkie XL aka Tom Holkenborg. Presenting us with more inventive sounds than actual musical implementation, XL is a master at creating sounds. 'Must There Be A Superman?' is dreamy in quality, but nightmarish in definition.

6) New Rules – Track 6 brings us back to Junkie XL's theme for Bruce/Batman and starts to flesh out more of his newly created Batman suite as it presents shades of the overall theme and builds off of what we heard earlier in 'Beautiful Lie' and 'Their War Here.'

7) Do You Bleed? – Giving us the Batman v Superman theme we've all been waiting for, this track is exactly what we could have hoped for when we learned of the match between The Dark Knight and Man of Steel. Zimmer and XL develop a 5 minute plus track that presents our first proper duel between two great composers. Zimmer and XL constantly rival one another and one up one another that finds Zimmer relying on his themes created for Man of Steel—particularly 'Oil Rig,' that then finds XL bring back certain percussive sounds from Mad Max: Fury Road with a little Don Davis Matrix Reloaded for good measure. 'Do You Bleed?' is the track of Batman v Superman: Dawn of Justice.

8) Problems Up Here – Zimmer brings back the grand and arrogant theme from Track 3) The Red Capes Are Coming in Track 8) Problems Up Here. He also returns to the track 'Goodbye My Son' from Man of Steel. Recognizable immediately for its lullaby like quality, Zimmer's spin here, like Track 4) Day Of The Dead, is a little more haunting and foreboding.

9) Black and Blue – The longest actual track on Batman v Superman, not counting the final track, 'The Batman Suite,' returns us to Track 1) Beautiful Lie and Zimmer's 'General Zod' track from Man of Steel.

10) Tuesday - Another bizarre entry that favors atmosphere and sounds as opposed to a specific theme, the track does build to a more horror genre kind of composition. Each note plays in a direct, almost militaristic fashion. But as the 10th track starts, 'Tuesday' concludes with an ending just as strange as its start.

11 Is She With You? – Beginning with a wild electric cello, Track 11) Is She With You? is possibly the best action track of the whole album, stealing the mythological thunder from Track 7) Do You Bleed? Bringing together all the themes cohesively, Zimmer and XL mesh Zimmer's previous work from Man of Steel like the track 'Terraforming' together with XL's Batman themes. Also given the inclusion of Wonder Woman on screen for the first time, we get an extraordinary sound for the iconic DC Comics super hero.

12) This Is My World – As the Batman v Superman: Dawn of Justice soundtrack concludes with its last track, Zimmer and XL revisit the sounds of Man of Steel once again. Beautifully we hear tones of Man of Steel track 'If You Love These People,' along with variations of Superman's theme. Zimmer and XL then build to a soft, more reflective track. Zimmer brings to mind the quieter concluding moments of 'Journey To The Line.' However, Zimmer proves once again how much of a storyteller he is with music. Instead of concluding the track on a final note, he instead ends as we wait for more. Track 12) This Is My World doesn't ever actually end and instead stops right before it could finish. Almost as if to say that Clark Kent's journey (considering the Superman heavy nature of track 12 is not yet finished, we are given a musical story that borders more on cliffhanger than anything else.

1 Men Are Still Good (The Batman Suite) – Opening with familiar tunes from Man of Steel, the Batman suite builds in a way that pays subtle homage to Mad Max: Fury Road. One part Hans Zimmer and James Newton Howard's Batman Begins and Henry Jackman's Captain America: The Winter Soldier, at 2:43 seconds into 'Men Are Still Good' violins start playing in an amazing way that brings the overall sound and themes of Batman together with Zimmer's Superman theme. Properly at nearly 5 minutes in listeners finally get The Batman Suite. Considering Batman v Superman gives us an older Batman, it feels as if Zimmer and XL took into consideration the 75+ year history of The Dark Knight and gave us a solid theme that nods slightly towards Danny Elfman, Elliot Goldenthal, and Christopher Drake's compositions.

The soundtrack for Batman v Superman: Dawn of Justice is just as ambitious and sprawling as one would expect from a major score by not only Hans Zimmer but Junkie XL (Tom Holkenborg) as well. For someone like myself who was greatly anticipating the kind of music we'd get from Zack Snyder's follow up and quasi-sequel to 2013's Man of Steel, it's somewhat disappointing as the album does feel as if it suffers a bit from the specific fear many have had when originally learning of the inclusion of Wonder Woman, The Flash, Aquaman, and Cyborg. Batman v Superman by Zimmer and Holkenborg does feel like a gigantic undertaking given the respect and time that it deserves, but it feels as if maybe this release doesn't allow us enough time with each character and by the time it's over, it's just over too soon despite the 70+ minute length. It will be interesting to see how the tracks play out over the course of the 2 hour and 30 minute movie. If you enjoyed Man of Steel and appreciated Junkie XL's previous works, Batman v Superman: Dawn of Justice will not disappoint. It just comes across if it is the dawn of something else that's much bigger and grander in nature.