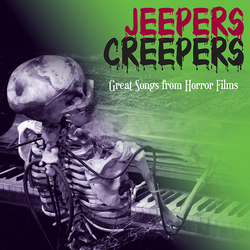 We're pleased to present a wonderful compendium of songs from horror films (mostly), featuring a stellar cast of Broadway and Hollywood performers.

While the films may have been scary, the songs are anything but—they are beautiful, like the classic "Stella by Starlight" and "The Faithful Heart" (from Journey to the Center of the Earth), while others are pure fun, like Burt Bacharach's classic song from The Blob, while some are just plain obscure yet great, like the amazing "Who Killed Teddy Bear?" from the film of the same name.

Originally released in 2003, the album has been out of print for many years. We've given it a fresh remastering and new cover art. Produced by Bruce Kimmel, this was the very first CD to feature the Kritzerland logo and name—a co-production with Red Circle. Kritzerland officially made its debut as a label in 2005. Orchestrations and Musical Direction by Grant Geissman. Limited to 1000 copies only.