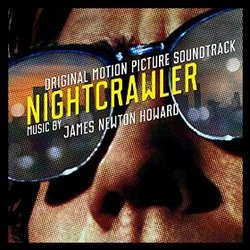 The upcoming film Nightcrawler, set for release this Halloween, is sure to be a special occasion at the movie theater. A film directed by Dan Gilroy, brother of Tony Gilroy (Michael Clayton, The Bourne series) is a haunting and fast paced look at the world of L.A. freelance crime journalism, in particular the practice of "night crawling." Acclaimed composer James Newton Howard (The Fugitive, Batman Begins, The Dark Knight, Collateral), who was nominated for Best Original Score for Michael Clayton, lends his musical expertise to the upcoming film. The score was released by Lakeshore Records to the digital storefront October 14 and will be released on CD October 27.

Any good movie needs a master architect. It needs an architect in the form of a director, cinematographer, and a composer. An expertly crafted film could easily be undone with a score handled lazily. It is no surprise that the masterful James Newton Howard has created another memorable score for a film, which is sure to become an unforgettable, modern-day classic in the vein of Taxi Driver. The soundtrack, produced by Joseph Trapanese (Tron: Legacy, Oblivion) and Sven Faulconer (The Hunger Games, Maleficent) is an amazing 52 minute study of ambiance, atmosphere, and mood. James Newton Howard's score for Nightcrawler stands alone as a great score, separate from the Dan Gilroy film. The Lakeshore Records album opens with "Nightcrawler," a lush, dreamy opener filled with synthesizers, percussions, and an electric guitar that welcomes you to Lou Bloom's (Jake Gyllenhaal) American Dream. It is a two minute invitation to the dark, accident-filled, "if it bleeds it leads" kind of nights Bloom experiences during his nights out in L.A. Be it videotaping a car crash, purveying a shootout, or hungrily looking for freelance journalism work, Howard's score quickly delves into the madness and blurred lines of professional integrity and the sociopathic pursuit of ladder climbing.

Howard's score, handled similarly to his work on urban films such as Falling Down and Collateral smartly captures the tone and feel of a Los Angeles night—or any metropolis for that matter. The music, at times reminiscent of Harry Gregson-Williams and Cliff Martinez, surely creates a symphony of sound that will stick with you long after giving the score a listen, and after leaving the theater. The album closer, "If It Bleeds It Leads," is a progressive rock opus kept at a frenetic and maddening pace. It is the perfect example of how Howard musically taps into the psyche of the character and scores the souls of the people that inhabit the films for which he composes.

Overall, the score for Nightcrawler is exactly what you'd want from a film like this. While there are moments that don't sound tonally like the track before, each of the 28 compositions perfectly capture a unique shade of the spirit of the film. About midway into the score, tracks like "Entering the House," "Waiting," and "Watching the House Footage" shift from the manic and curious nature to capture more of the urban tension and moody suspense of the rest of the movie. If you're looking for a well-crafted album or are excited about the October 31 Open Road Films release, then the James Newton Howard soundtrack is a worthy buy.