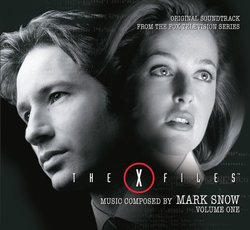 The X-Files: Volume One - Reissue

This previously out-of-print collection arrives just in time to celebrate the spectacular network TV return of the beloved series! Acclaimed composer Mark Snow created nine seasons of thrilling and mesmerizing score for this legendary show, expertly and elegantly weaving a complex musical tapestry of paranormal mystery, suspense, terror, hope and love that became as vital to the series' enduring success as its writing, cast, cinematography and editing. Music selections from 40 episodes that span the show's nine seasons are presented on four discs and complemented by a 40-page booklet.

Produced by Mark Snow, James Nelson and MV Gerhard and mastered by James Nelson, this limited edition re-issue of 2000 units features more than 5 hours of amazing score. Film music writer Randall D. Larson contributes in-depth liner notes, with comments by the composer, and detailed track-by-track analysis. A must-have release for soundtrack enthusiasts and a meaningful keepsake for all fans of this beloved series.

The contents of this release is the same as the previously-released version, except it is being re-issued without the outer, black slipcase box, and the booklet has been re-formatted to fit inside the clamshell jewelcase.