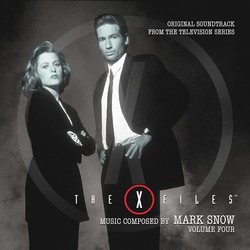 La-La Land Records and Twentieth Television proudly present the fourth 4-CD volume of composer Mark Snow's original scores from the award-winning, landmark television series, The X-Files. With his signature style and original sound, Snow's captivating work underscored and enriched all the drama, suspense, intrigue and humanity that were hallmarks of this classic and beloved series created by Chris Carter. This 4-CD collection is a treasure-trove of musical highlights, including score from such notable episodes as "Apocrypha," "Avatar," "Never Again", "Triangle," "Invocation", "Nothing Important Happened Today 1 and 2," and more! Also included is the cue "Smoking Telegram," the finale music from the X-Files feature film, Fight the Future. Produced by Mike Joffe and Mark Snow, and mastered by James Nelson, this attractive 4-CD set is limited to 2000 units, showcases more than 5 hours of music and includes a 42-Page CD booklet that features exclusive, in-depth liner notes from writer Randall Larson. The sleek art design is by art designer Mark Banning. As always, The Truth is still out there ñ and Mark Snow's music expertly guides us along the path towards it!