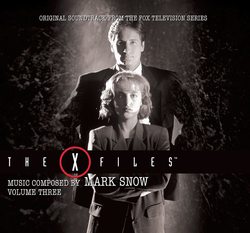 La-La Land Records, Twentieth Century Fox and Twentieth Century Fox TV Records proudly present the third 4-CD volume of composer Mark Snow's spellbinding original scores from the award-winning, landmark television series, The X-Files. Over the run of this beloved series, Snow's music shaped all the episodes' many emotional and contextual layers, crafting a sonic atmosphere unlike anything prime time television had heard before. Such notable episode scores as "Deep Throat," "Sleepless," "Detour," and "Drive" are featured here, among many others.

Produced by Mike Joffe, Mark Snow and Nick Redman, and mastered by James Nelson, this attractive 4-CD compilation, limited to 3000 units, showcases more than 5 hours of music and is housed in a sleek, hardcover slipcase, alongside a 40-Page CD booklet that contains exclusive, in-depth liner notes from writer Randall Larson. The striking packaging is by art designer Mark Banning. The truth is indeed still out there—and Mark Snow's indelible music continues to shine the light towards it!