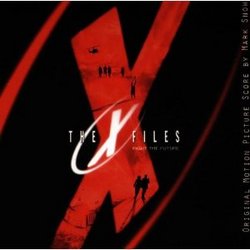 by Dan Goldwasser September 20, 1998
3.5 / 5 Stars
In Mark Snow's score to THE X-FILES, he explores variations on themes he developed for the hit television show - but on a much larger scale.

In the film based from the television show, Snow manages to keep the "X-Files"'s distinct texture while utilizing a full orchestra. With a sad choir and pulsing chords, I found myself immediately drawn into the dramatic moments of the score. The X-Files theme (recognized worldwide) is present in the main titles, but has a noticible variation with much more orchestration and percussion. Much of the action is scored, allowing the listener to almost envision what might be on the screen at any given time.

Snow seems to have kept to the spirit of the television show, while on a much grander scale.The film does not open until June 19th, and as such it is difficult to say how the music works within the film. But if you are familiar with Snow's work on the television show, then you will not be dissapointed. For those who were dismayed by the inclusion of dialogue in Snow's first X-Files CD ("The Truth and The Light") will be pleased to note that there is no dialogue at all present within the over 65 minutes of score.