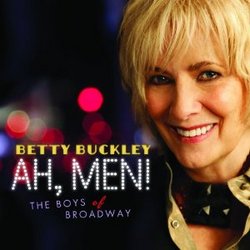 Ah, Men! The Boys of Broadway

Ah, Men! The Boys of Broadway features men's songs from Broadway shows that Buckley has always wanted to sing, including numbers from Sweeney Todd, West Side Story, Guys and Dolls, Pippin, The Fantasticks and more. The centerpiece of the new album is "A Hymn to Her," a rewrite of My Fair Lady's "A Hymn to Him" in which Henry Higgins asks "Why Can't a Woman be More Like A Man?" The prolific singer reverses the question in a witty retort complete with musical references to iconic male Broadway roles including Tevye in Fiddler on the Roof, Harold Hill in A Musical Man and Jean Val Jean in Les Miserables.

Recorded in Los Angeles at the legendary Sound Factory and produced by Betty Buckley, Ah, Men! The Boys of Broadway features arrangements by Christian Jacob and Eric Stern with Jacobs on piano, Peter Barshay on bass and Matt Betton on drums. "A Hymn to Her" concept and lyrics are by Eric Kornfeld and Eric Stern.